The red planet could still be a wet planet, according to a spectral analysis of images captured by an orbiting spectrometer. 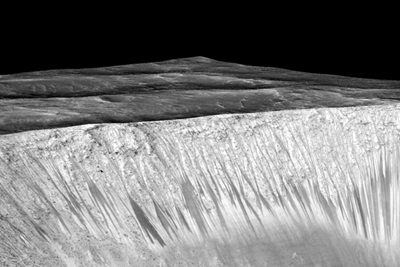 NASA’s revelation that briny liquid water featuring a cocktail of salts could still be flowing on Mars today relies on spectral analysis of data captured by an optical instrument that has been orbiting the planet for a decade.

Revealed in a much-anticipated press conference coinciding with the publication of a paper in the journal Nature Geoscience, the findings are said by NASA to provide the strongest evidence yet that liquid water still flows on Mars – in turn suggesting that the planet may harbor some form of life.

Using the Compact Renaissance Imaging Spectrometer for Mars (CRISM) instrument, which covers visible and infrared wavelengths to a wavelength of nearly 4 µm, Georgia Tech PhD candidate Lujendra Ojha and colleagues were able to take a closer look at images collected by the High-Resolution Imaging Science Experiment (HiRISE) that had showed odd “streaks” appearing periodically on the Martian surface. Both CRISM and HiRISE are part of the Mars Reconnaissance Orbiter (MRO), which arrived at the red planet back in August 2005.

Ojha said that the team had been investigating these narrow streaks on Mars ever since their discovery, mainly to elucidate their formation mechanism and to find out if water could be flowing. “However, the key evidence was missing – until now,” he reported. “And that was their chemical identity.”

Spectral signatures
Using CRISM, the researchers analyzed spectral signatures of hydrated minerals on slopes where mysterious streaks had been seen in HiRISE images. “These darkish streaks appear to ebb and flow over time,” said NASA. “They darken and appear to flow down steep slopes during warm seasons, and then fade in cooler seasons. They appear in several locations on Mars when temperatures are above minus 23°C, and disappear at colder times.”

The inference is that liquid water – albeit water that seems to be full of magnesium perchlorate, magnesium chlorate and sodium perchlorate – is flowing as the seasons on Mars change. The downhill flows are known technically as “recurring slope lineae”, or “RSLs”.

Ojha said: "When most people talk about water on Mars, they're usually talking about ancient water or frozen water. Now we know there’s more to the story. This is the first spectral detection that unambiguously supports our liquid water-formation hypotheses for RSL." 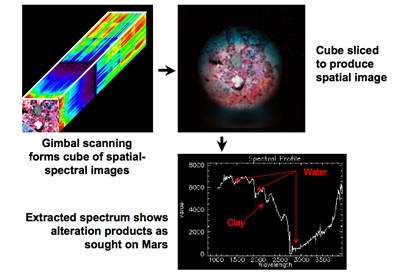 Downhill ‘flow’
In their paper, Ojha and colleagues report that the spectral evidence shows RSLs that appear and grow in the downhill direction during warm periods of the Martian year. “Our findings strongly support the hypothesis that recurring slope lineae form as a result of contemporary water activity on Mars,” they wrote.

In supplementary information for the paper, the team adds: “Spectral absorptions indicative of hydrated salts only occur in the images acquired towards the end of the southern summer, when fading RSL were observed to be longest and widest.”

They also admit to finding no signs of hydration when conducting a spectroscopic search for signs of flowing water at several other RSL sites, although those negative results were not reported in the published paper.

While it’s still impossible to say whether life does exist on Mars today, the new information appears to provide future missions with a good place to start looking. “We now have a way to understand better low life *might* survive,” tweeted the University of Arizona team that operates the HiRISE instrument.

However, because lots of the RSLs appear to be on steep slopes, sending a lander or rover to investigate looks problematic. Collecting any in situ samples will likely have to wait until the first human explorers arrive at the red planet – something that NASA is obviously keen to generate support for.

“We are starting to put together a much more interesting picture of what Mars is like. I grew up in the era when Viking had landed and revealed a desert-like planet, apparently dead.”

At that point, Mars did not look nearly as interesting as it now seems to be, added Grunsfeld, with NASA suggesting that it could previously have featured a huge ocean covering much of its northern hemisphere, and up to a mile deep.

Anticipating future manned missions to the planet, the ex-astronaut added: “We are going to Mars – soon – and I hope we’ll be sending humans to the red planet to explore.

“Today’s announcement of a really fascinating result about current water on Mars is one of the reasons why I feel it’s even more imperative that we send astrobiologists and planetary scientists to Mars, to explore the question: is there current life on Mars?”