Legacy Tower building announced as the administrative center of the $600M effort by SUNY Polytechnic, amid concern over who exactly is in charge. 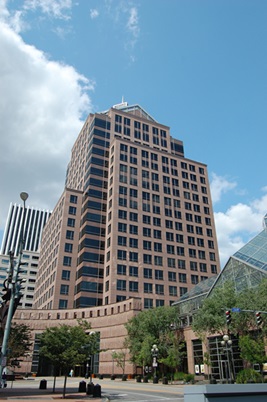 by Mike Hatcher
Local tensions have broken out over a decision to site the administrative headquarters of the $600 million AIM Photonics at the iconic Legacy Tower in Rochester – previously the home of eye health giant Bausch + Lomb.

Senior representatives from SUNY Polytechnic Institute, which is contracting directly with the Department of Defense on the project to industrialize integrated photonics, announced the selection. But that has spawned an argument about how exactly such decisions are being taken, with local Congresswoman Louise Slaughter saying that “one man’s ego” was disrupting what ought to be a collaborative process.

The past week has seen a dispute over the best location in downtown Rochester to house the office – some prefer the idea of using the Sibley Building just around the corner from the Legacy Tower – escalate into an ugly public spat.

In the same statement, the AIM Photonics CEO Michael Liehr said that the Legacy Tower was the “resoundingly consensus choice”. He added: “We will now move quickly to finalize terms with the owner so we can enter the next phase of the institute’s launch, including beginning the process of hiring personnel.” 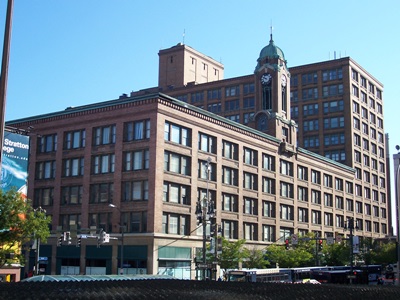 “Decisions must be made collaboratively”
However, the University of Rochester and its own CEO Joel Seligman were conspicuously absent from that announcement. In fact, Seligman and the Rochester Institute of Technology (RIT) president William Destler had earlier released a joint statement, co-signed by Slaughter and others, that appeared to criticize the decision-making processes within AIM Photonics.

“We believe it unwise for program elements, including the location of the program’s corporate headquarters and manufacturing facilities, to be determined in haste without full consultation with appropriate leaders in our community,” they said.

Adding that the AIM Photonics Center would be a “game changer” for Rochester, they continued: “Any undertaking of this importance must be developed in an orderly way. Decisions about where to site the headquarters and manufacturing facilities require a careful process and must be made collaboratively.”

And although they expressed a preference for the Sibley Building, they said they were confident that the project would be a success, regardless of where exactly in downtown Rochester the HQ ended up. 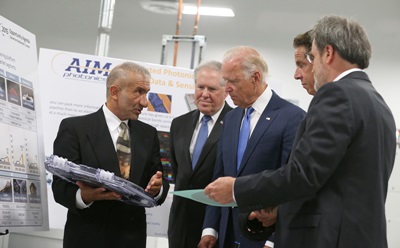 “One man’s ego”
Then on August 18, Slaughter – seen as one of the key negotiators in the New York bid to host the photonics manufacturing hub – wrote on her web site:

“This dispute is not about office space, it’s about leadership of the photonics center. The White House created these national centers of innovation and we worked for years to get photonics designated as one of them.”

Pointedly, Slaughter added: “The science and the expertise are in Rochester, which is why decisions regarding facilities must also be made in Rochester. I worked for three years to achieve this and we will not be deterred by one man’s ego.”

The Congresswoman, credited with convincing New York governor Andrew Cuomo to stump up $250 million in state backing for the effort, is believed to be referring to the ego of Alain Kaloyeros, the nanoscience expert and CEO of the SUNY Polytechnic Institute.

Since then SUNY and UR have got together to issue a brief letter, signed jointly by Kaloyeros and Seligman, that is intended to calm matters. Seen by optics.org, it says that the "unprecedented" collaboration of SUNY Polytechnic Institute, UR and RIT will be vital to the future of Rochester, but is non-committal on the precise location of the HQ:

"Importantly, we share an unwavering commitment to establishing the business headquarters and technology accelerator/incubator in downtown Rochester," it states. "We will also continue to work together to identify additional facilities in the Finger Lakes region."

Too many cooks?
For its part, the New York Photonics Cluster – also based in Rochester – said that it welcomed the joint letter signed by Kaloyeros and Seligman.

“We salute the leadership of Governor Andrew Cuomo for convening New York’s ‘Dream Team’ and supporting his vision with a major investment...it is gratifying to see the collaborative spirit re-ignited among New York partners with today's joint leadership statement.”

Let’s hope the “dream team” is not turning into a case of “too many cooks”.