The Okinawa Institute of Science and Technology (OIST) Graduate University’s Femtosecond Spectroscopy Unit and Neurobiology Research Unit, along with collaborators at the University of Otago, New Zealand are using a combination of lasers, nanotechnology and neuroscience to develop a new, versatile drug delivery system.

The researchers describe their work as using a laser to release - in a controlled and repeatable manner - a neurochemical that is dysfunctional in Parkinson’s Disease in Nature Scientific Reports. Professor Keshav Dani commented, “Combining physics and neurobiology in this way to tackle Parkinson’s Disease is research I would never have been able to do outside of OIST.”

The OIST-Otago team says that targeted drug delivery is an exciting new area of research for a cure or therapy for many diseases. Currently, drugs are usually administered in a systemic way meaning that tissues or organs that do not need the drug still receive it, leading to unwanted side effects, such as in chemotherapy, which is toxic not only to the intended target cancer cells, but also to healthy tissue.

However, recent advances in nanotechnology and biology are opening up the possibilities in targeted drug delivery, in which researchers can release drugs or compounds into a specific tissue or even individual cells, which allows the drug to reach only its intended target. In their recent paper, the OIST researchers describe a method to encapsulate a drug in a shell of lipids, or liposome (fat), and modulate the release of the drug using a pulse from a laser.

Members of OIST’s Neurobiology Research Unit approached the Femtosecond Spectroscopy Unit with the idea to apply laser technology in a possible therapy for Parkinson’s Disease, in which the neurochemical dopamine does not function properly. The researchers wanted to use the precise timing and intensity of femtosecond lasers to control the release of dopamine in a way that mimicked its natural dynamic mechanism. 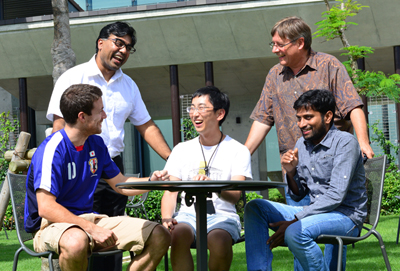 Target team: the OIST researchers involved in the laser-assisted research.

The researchers encapsulated dopamine in a liposome tethered to a gold nanoparticle. They then used a femtosecond laser pulse as the energy source. The energy is absorbed by the gold nanoparticle and then transferred to the liposome, causing the liposome to open and release the dopamine. The length of time and therefore amount of dopamine released can be precisely controlled by the intensity and length of the laser pulse.

The researchers also showed that the liposomes are not destroyed by the laser as in previous similar studies. Therefore, the release of dopamine, or any chemical contained within the liposome, can be repeated and controlled.

Takashi Nakano of the OIST Neurobiology Research Unit commented, “By this method, we can administer a wide range of drugs with precise timing and duration using laser pulses with sub-second accuracy. We are very excited about the potential this new tool brings to neurobiological research."

The next step will be to use these laser-activated liposomes in living tissue, and eventually, in a live animal. The ability to release potentially any type of drug, chemical or naturally occurring compound in the right place at the right time with a controlled dosage will open new possibilities in medicine.

For Prof. Dani, it is exciting for him to “be able to utilize a physics technique I learned in graduate school for applications in neuroscience.” Nakano added, “the close collaboration between physicists, chemists, and neuroscientists made this outcome possible. OIST’s interdisciplinary research has truly facilitated smooth understanding of fields outside the collaborators’ individual expertise.”

The future of new technologies and cures for disease may lie at the boundary between different scientific fields, such as physics and neuroscience. OIST researchers are addressing today’s scientific and medical puzzles, like Parkinson’s Disease, by developing tomorrow’s technologies that straddle those scientific boundaries. Maybe Parkinson’s Disease will be cured by a curious neuroscientist who works across the hall from a willing physicist in Okinawa.