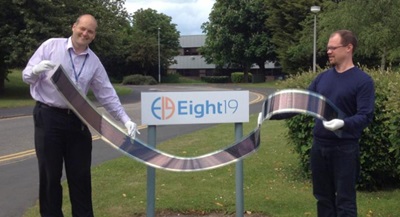 Rolling out the OPV

The University of Cambridge spin-out company Eight19, which is working on low-cost organic photovoltaics (OPV) technology, has raised another £1 million of equity finance.

The latest investment was led by UK-based IP Group and one of its managed funds, with existing investors also supporting the round. Early investors in the company included the French materials giant Rhodia, although it did not participate in the latest round.

According to Eight19 - whose name reflects the time taken for solar photons to reach Earth - the money will be used to further develop its proprietary production processes in anticipation of future volume manufacturing, and to aid other commercial activity.

“Eight19’s technology provides affordable power for autonomous electronics and high-volume off-grid consumer and industrial applications,” it added. “The company is working closely with a number of customers and partners to integrate OPV into their products and bring the technology to market.”

Chairman Chris Harris told optics.org: "We have demonstrated greater than 7.5 per cent cell efficiency on plastic substrates with a scalable semiconductor formulation. We have also demonstrated full roll-to-roll fabricated modules."

OPV: mixed sentiment
Spun out of Cambridge’s renowned Cavendish Laboratory in 2010 and with Sir Richard Friend among its founders, Eight19 soon attracted £4.5 million in equity funding. But the market sentiment surrounding OPV has been very mixed since then, with some high-profile developers such as US-based Konarka going out of business and Germany’s Heliatek struggling to attract the kind of financing that it needs to scale to volume production.

More positive developments have seen laboratory demonstration of OPV films with conversion efficiencies in excess of 11.5 per cent at UCLA and Heliatek. And although those technologies have yet to transfer to volume production, if that can be achieved along with stable operation, they do have the potential to be used widely in off-grid and building-integrated applications.

According to Harris, lifetime tests have shown that Eight19's flexible modules still deliver 80 per cent performance after 8000 hours of continuous illumination. Part of the new funding will be used to develop further improvements to those lifetimes, he said.

Harris added: “We are naturally delighted at the support shown by IP Group and our existing investors who share our view of the market potential for OPV and the strength of our proprietary technology. The additional financing will allow us to accelerate development of our manufacturing process technology, as well as to better support our customers by strengthening our commercial organisation.”

Meanwhile Robert Trezona, previously head of research and development at the cleantech-focused Carbon Trust advisory group, and now in charge of cleantech investments at IP Group, will join the Eight19 board.

Trezona said: “We are very impressed with the significant progress Eight19 has made in developing its proprietary production technology and in demonstrating excellent performance under low-light conditions.

“Eight19’s technology has the ability to enable a range of new market opportunities in off-grid solar and energy harvesting applications.”

Aside from Eight19, IP Group holds equity positions in dozens of other UK technology companies. In the area of photonics these include the Sheffield-based LED developer Seren Photonics, and Southampton spin-out Stratophase.