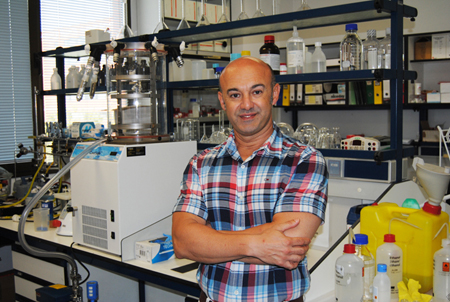 "Promising results" - Pablo Botella, researcher at the Institute of Chemical Technology of Valencia.

Spanish researchers have developed – on a nanometric scale – a new anti-cancer drug that combines photothermia and chemotherapy.

Previously, researchers have applied this new drug on human glioma cell cultures (nervous system tumors) in the laboratory. The results are particularly interesting for the treatment of skin cancer (melanoma) and solid gliomas.

The work was coordinated by Professor Eduardo Fernández Jover (Miguel Hernández University of Elche) and Pablo Botella, a researcher at the Institute of Chemical Technology of Valencia (both in Spain).

The new drug comprises hybrid particles containing clusters of gold nanoparticles protected by a covering of porous silica which incorporates molecules of an antitumor drug (camptothecin). The gold nanoclusters have photothermal activity, absorbing the light generated by a biomedical laser.

Pablo Botella explains that while organic tissues are virtually transparent to this radiation, its absorption by the gold nanoclusters causes a large local temperature increase. "When this occurs within a cancer cell, the high internal stress leads to its destruction”.

The accumulation of these nanoparticles in cancer cells is greatly favoured by the increase of vascular permeability that occurs at a tumor level. Furthermore the release of chemotherapeutic agents transported inside the porous cover of the particles, eliminates those malignant cells that have not been reached by the laser.

"This ensures much greater effectiveness than traditional therapy, and the absence of side effects from the antitumor drug in other tissues," says Professor Eduardo Fernández.

"The study has completed its initial phase conducted on cell cultures and, currently, there are plans to develop the next preclinical stage on animal models of skin cancer and gliomas. However, it is still early days to start on humans," the researchers conclude.

These results were first published in Dalton Transactions, Issue 31, 2012.