Results show an African-dwelling hominin preferred harder foods than those eaten by other human ancestors. 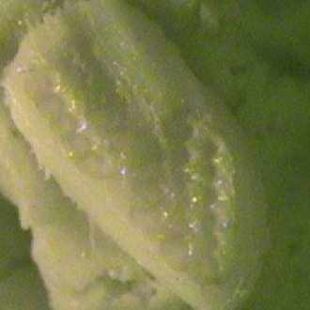 Knowledge of the dietary habits of early hominins is a key ingredient in understanding their lives and behavior, although obtaining the evidence to prove what that diet actually was can be difficult.

Specimens of Australopithecus sediba from Malapa, South Africa, have previously yielded valuable information about their physiology and anatomy, but their feeding ecology had not been investigated. Now an international team from South Africa, Germany and the US has found that Au. sediba's tastes ran to different foods than those preferred by other specimens, contrasting with the available data for other hominins in the region and elsewhere. The findings are published in Nature

These results came partly from the use of laser ablation gas chromatography isotope ratio mass spectrometry (LA-GC-IRMS) to analyze samples of fossilized teeth. In this case, an upper right first incisor and upper right second molar were examined.

The technique employed a laser, operating at 10.6 microns and focused to a spot size between 200 and 300 microns diameter, to ablate sections of the surviving dental enamel. This liberated CO2 gas, which then passed into a gas chromatograph system for isotope analysis. A sequence of 10 ms, 1 to 2 watt ablation events contributed to each individual result.

The key metric from the results is the ratio of Carbon-12 and Carbon-13 in the gas, usually expressed in terms of δ values, ie. parts-per-thousand differences from a standard. This can pinpoint whether the teeth had previously gnawed mainly on trees and shrubs (referred to as C3 plants), or instead on tropical grasses and grains (C4).

C3 specialists
"The δ13C values of the Au. sediba individuals fall outside the range of all 81 previously analyzed African early hominins, indicating a nearly pure C3 diet," noted the researchers. "The carbon isotope compositions are unusual for hominins, and more typical of C3 specialists like giraffes. If these individuals are representative of the species, Au. sediba had a diet that was different from those of most early African hominins studied so far."

Taken together with microscopic examination of the wear patterns on the ancient teeth and further analysis of plant tissues held in the dental tartar, the researchers suggest that Au. sediba made use of habitats in which C3 plants grew within an environment that also had abundant C4 grasses, similar to the gallery forests that form along rivers or wetlands. The hominins consumed the C3 foods in preference to the other resources that were widely available.

"Previous analyses have shown that Au. sediba has an unusual suite of morphological features, and our results present new oddities and questions," commented the team. "This work suggests that the diets of australopiths were diverse, both within and between most species, which mirrors recently recognized morphological diversity. Nevertheless, our interpretations of the diet of Au. sediba must be tempered by the small sample that is available."