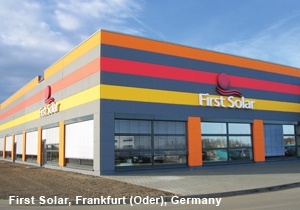 First Solar, ranked as the world’s leading producer of photovoltaic modules in 2011, is to shut its two manufacturing facilities in Frankfurt, Germany, as part of a massive restructuring that will also see 2000 employees lose their jobs – about 30% of the firm’s workforce.

The company is currently in negotiations with worker representatives and government officials in the country, where closing sites and cutting jobs is notoriously difficult. Nevertheless, work in Frankfurt is expected to cease in October, with full closure by the end of the year.

US-headquartered First Solar will also idle four out of 24 production lines at its production facility in Kulim, Malaysia, in a bid to reduce operational costs in the face of sharp reductions to PV subsidy programs in key European markets, in particular Germany.

"After a thorough analysis, it is clear the European market has deteriorated to the extent that our operations there are no longer economically sustainable, and maintaining those operations is not in the best long-term interest of our stakeholders," said Mike Ahearn, still First Solar’s interim CEO following the sudden departure of Rob Gillette last year.

"Decisions like this are not easy, especially given how important the European markets and our associates in Europe have been to the development of our company and the solar industry as a whole,” he added. “We are committed to treating all affected associates fairly, and to building our relationships with European business partners that are aligned with our strategy of pursuing utility-scale solar opportunities in sustainable markets around the world.”

The decision to close the Frankfurt site comes shortly after Germany’s politicians signed off cuts to feed-in tariffs. The manufacturing facility began volume operations in 2007, and was First Solar’s second production site (the first is in Perrysburg, Ohio). In 2011, production capacity at the Frankfurt site grew to a approximately 528 MW after a significant expansion.

The changes will mean that the company has a total production capacity of 1.7 GW in 2012, having produced around 2 GW of modules last year.

Fundamental change
Earlier this year, the company had signaled its intentions by postponing the commissioning of a planned new production site in Mesa, Arizona, idling four production lines in Frankfurt, and saying that it intended to reduce operating expenses by half in the long term.

"The solar market has fundamentally changed, and we are quickly adapting our market approach and operations to maintain and build upon our competitive advantage," added Ahearn in the company’s statement. "After a period of robust growth, First Solar is scaled to operate at higher volumes than currently exist following the reduction of subsidies in key legacy markets. As a result, it is essential that we reduce production and decrease expenses to reflect the smaller volume of high-probability demand we forecast. These actions will enable us to focus our resources on developing the markets where we expect to generate significant growth in coming years."

The drastic actions will cost First Solar at least a quarter of a billion dollars in all, primarily relating to asset impairment of the Frankfurt site (estimated at $150 million-$250 million), severance payments of around $60 million, and the return of a $30 million government grant related to the Frankfurt closure.

But the cuts will also reduce costs by more than $100 million per year, and will help push down the cost-per-watt of its CdTe-based modules towards $0.60 next year – bringing it closer to the target needed to usher in a new era of unsubsidized photovoltaics. Unsubsidized markets are in their infancy, and First Solar will bridge the gap until then by focusing on its large existing pipeline of projects valued at $3.4 billion (equivalent to 2.8 GW).

In an investor call to discuss the actions, CFO Mark Widmar stressed that recent political moves in Germany and Italy had effectively torpedoed the market for utility-scale PV there – ironically, the most efficient implementation of the technology.

The Frankfurt fab closures will account for 1200 of the job losses, along with another 150 European jobs in sales and service in Europe. A further 550 will go in Malaysia, as will around 200 largely non-manufacturing jobs in the US.

“These restructuring actions are difficult to make – and take – but we must take action,” said Widmar. “The solar market has changed, and so must we.”

The CFO also denied that the actions were, in the words of one analyst, "window dressing for a sale [of the company]". "No, it's not that at all," he said.