With a 6GW pipeline of project applications, demand for PV is set to grow at 45% per annum through 2017. 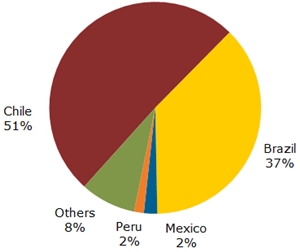 As the photovoltaics sector transitions to emerging markets and away from Europe, analyst company NPD Solarbuzz is predicting a massive rise in demand for solar energy across Latin America and the Caribbean over the next five years.

According to the firm’s latest report, new incentive programs and energy policies in the sun-rich region will generate a compound annual growth rate (CAGR) of 45% between now and 2017 as the technology breaks free from niche, off-grid applications and into the mainstream.

More specifically, it is Mexico, Chile, and Brazil that are emerging as market leaders within the region, driven by a combination of net-metering and favorable policies. Together, those three countries are forecast to account for almost 70% of PV demand by 2017.

Solarbuzz reckons that energy regulators across the region had received more than 6 GW of PV project applications by the end of 2012, stimulating a healthy pipeline of new opportunities for component suppliers, developers and installers. Chile and Brazil account for nearly 90% of that total.

The ground-mount segment is expected to provide 60% of the PV demand by 2017. But commercial and residential applications will grow in adoption from 2015 onwards as prices continue to decline and local installers target new revenue opportunities. “The off-grid sector will continue to benefit from increased demand from rural electrification and development initiatives,” Solarbuzz says.

Obstacles to overcome
Sunsong admits that while the fundamentals look good, there remain technical, economic, and political obstacles to be overcome. “PV connection and integration procedures are not yet clearly defined, and there are concerns about grid stability as PV contributions come online,” noted the analyst.

“Electricity subsidies in Mexico and low natural gas prices in Peru are also delaying the onset of PV grid-parity for some end-user categories, while import tariffs across the region are keeping PV system costs on the high side.”

With PV demand softening across the more established European markets like Germany and Italy, and growing uncertainty regarding access to PV markets in the US, China and India resulting from trade disputes, Solarbuzz sees emerging regions as essential for PV companies to sustain revenue growth targets.

“Having a successful market-entry strategy for Latin America is now essential for leading PV suppliers before key markets develop in the region and supply-chains and purchasing channels are established,” Sunsong concluded.