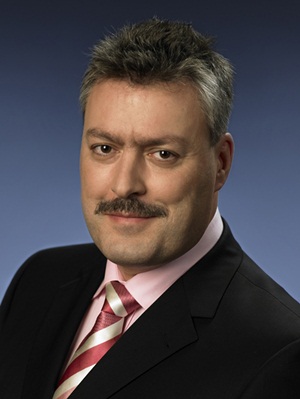 Jenoptik CEO Michael Mertin is the new president of the Photonics21 association.

Mertin was elected for an initial period of two years by the industry-driven organization’s board of stakeholders, and fills a position that was vacated by Osram’s Martin Goetzeler in March this year. He takes on the role at a critical point in time, just as Europe’s power brokers are negotiating the European Union’s budget for the 2014 to 2020 period.

The proposed €80 billion budget of the “Horizon 2020” program of innovation is a critical part of those discussions, and thanks in part to the previous efforts of Photonics21 to unify Europe's optical technology community, photonics has already been recognized as a “key enabling technology” under the Horizon 2020 banner.

The organization has also taken the lead on a proposed €7 billion public-private partnership that is intended to drive the development of commercial photonics applications after the current Seventh Framework Programme of research funding expires at the end of 2013.

In his introductory address as president, Mertin reiterated that Photonics21 welcomed the Horizon 2020 program, which in the photonics area is expected to have a much stronger emphasis on innovation for commercial gain – and less of a focus on pure scientific research - than previous funding programs.

The aim is to develop photonics and other technologies that will have a significant impact on economic growth and jobs, and Mertin said: “This implies that Europe is fully exploiting and developing those technologies, in which Europe has a strong and well-established industry base, able to gain and defend a leading competitive position.”

He added: "Since Europe is facing an economic crisis and has been cutting budgets across the continent, it is now crucial to ensure that every euro is spent wisely, and that all stakeholders live up to their commitments and responsibilities. Photonics21 will support this endeavor through the establishment of a public-private-partnership and an industry pledge to a four-fold leverage of public funding."

Raising the profile of photonics
Since Goetzeler’s departure eight months ago, the Photonics21 board of stakeholders, which comprises many prominent members of Europe’s photonics community, is believed to have considered eight candidates for the position of president.

In an interview with optics.org earlier this year, Photonics21 vice-president and former Bookham (now Oclaro) CEO Giorgio Anania expressed an interest in the role – although he also highlighted that it could be a very time-consuming undertaking.

Set up in December 2005, the Photonics21 organization now includes around 2000 representatives of industry and science from across Europe. It has been credited by many – especially outside the continent – with raising the profile and influence of photonics within political circles.

The European Commission vice president Neelie Kroes, who is responsible for spearheading the continent’s “digital agenda”, has regularly spoken at Photonics21 events, and in 2011 urged the organization to propose a public-private partnership to support technology development under the forthcoming EU budget period.

Photonics21 has also carried out studies of the global photonics market, now estimating its total worth to be approximately €300 billion - of which Europe’s share is believed to be around €60 billion in 2012.

Mertin, who has been the chairman of Jenoptik’s executive board since 2007, has wide-ranging experience in a number of photonics application fields, as well as a strong background in business administration.

A graduate of RWTH Aachen and the nearby Fraunhofer Institute for Laser Technology (ILT), Mertin initially worked on laser materials processing. He joined Carl Zeiss in 1996, initially as head of coating technology, before taking over as the head of the company’s “eye care” strategic business unit in 2004 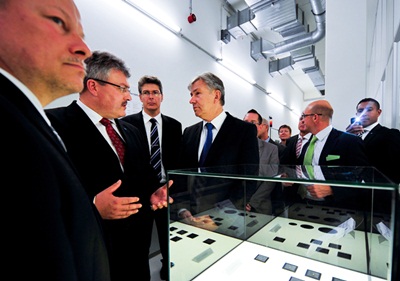 Mertin then moved to Jenoptik, first as chief operating officer. Since taking over as CEO he has prioritized a transition from standalone components to providing value-added optical systems, and a global expansion of the business that now appears to be bearing fruit.

As well as the Jenoptik responsibilities, Mertin is also a member of the board at the German high-tech industry association Spectaris, and chairman of the board of trustees at the world-renowned Fraunhofer Institute for Applied Optics and Precision Engineering in Jena.