The instantaneous velocity of a Brownian particle has been measured for the first time, a result Einstein believed would be impossible. 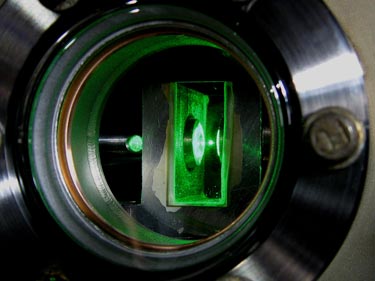 By trapping a micron-sized silica bead in air in an optical tweezer, researchers at the University of Texas at Austin, US, have measured the instantaneous velocity of a Brownian particle for the first time. The result provides direct verification of Einstein's equipartition theorem and paves the way for future tests of the theorem at the quantum level (Science DOI: 10.1126/science.1189403).

"We are currently working on feedback cooling of an optically trapped bead," Mark Raizen from Austin's Center of Nonlinear Dynamics told optics.org. "Along the way, we will be able to test the equipartition theorem in new regimes where it is predicted to fail. Our ultimate goal is to cool the motion of a bead to the quantum mechanical ground state, and that will be our focus over the next few years."

The optical tweezer was pioneered by Arthur Ashkin at Bell Labs in 1970. Although one of his earliest experiments involved studying a bead held in air, he quickly moved to studying particles in water, which is a much easier regime to work with. Since then, almost all research with optical tweezers has been in water.

The equipartition theorem states that a particle's kinetic energy, the energy it possesses due to motion, is determined only by its temperature, not its size or mass. "It was crucial that our experiment was performed in air, so we decided to revisit this old problem with new tools," explained Raizen. "The density of air is much less than water so the velocity of a Brownian particle in air changes much more slowly than in water, enabling the measurement of instantaneous velocities."

Raizen and his colleagues developed several new ideas to make the experiment possible. The first was the use of ultrasonic vibrations to launch single glass beads into the air where they are trapped "in flight" in air and vacuum by the optical tweezer.

"The silica beads are initially held about 3 cm above the trap on the surface of a glass slide," explains Raizen. "The glass slide is inside a chamber, which is sealed from the outside atmosphere. We activate an ultrasonic transducer for about 10 ms to vibrate the glass slide, which results in thousands of 3 µm diameter silica beads falling off. The glass beads are separated from each other by the vibrations, and only one of them is trapped by the tweezer. Once a bead is trapped, it is stable for many hours."

The team used a dual-beam counter-propagating optical tweezer, rather than a single-beam optical tweezer, to create a larger working distance from the lenses. According to Raizen, the choice of laser made a big difference. "We used a continuous-wave single-frequency laser at 1064 nm," he commented. "It is a monolithic NPRO diode-pumped laser with an amplitude noise of less than 0.05% rms over the range from 10 Hz to 2 MHz."

The final aspect is monitoring the position of the trapped bead with ultrahigh spatial and temporal resolution. "We designed and built the detector system ourselves, as we needed a faster response time than commercially available quadrant detectors," said Raizen. "The position of a trapped bead is monitored by measuring the deflection of one of the laser beams. The laser beam is split by a mirror with a sharp edge, and the power difference between the two halves of the beam is measured by a fast balanced detector. We obtained 0.1 nm spatial resolution and 5 µs temporal resolution in measuring the position of a trapped bead."