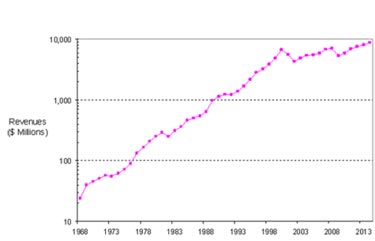 The global market for lasers will grow by $2.6 billion to $8.8 billion in 2014, a compound annual growth rate of 9%, according to US-based market analyst Strategies Unlimited. This is a more moderate estimate than the average rate of 14% over the history of the market.

Worldwide laser sales fell 25% in 2009, the first decline since 2000, but 2009 was still among the six top revenue years in the history of the laser. These are amongst the findings of a new report, Laser 2010, from Strategies Unlimited.

According to the analyst, sales of fibre lasers fell only 5% in 2009 to $280 million, much better than other segments. Sales at the leading supplier of fibre lasers, IPG Photonics, fell to their 2007 level, losing share. That said, IPG stands to gain in the recovery with its strong coverage in kilowatt-grade fibre lasers.

The recovery is aided by a turnaround in equipment for fabricating semiconductors and displays, and for communication equipment, as well as stable sales in lasers for biomedical instrumentation, and military and scientific lasers.

The materials processing sector will see a slower recovery. Strategies Unlimited predicts that lasers for data storage are in for harder times, as the world turns more toward online sourcing and flash memory. The laser market will continue at a lower growth rate, with economic cycles playing a larger part than in the past.

Some segments of the laser market began declining in 2007, with the full force felt in early 2009. An upturn was evident in mid-2009 due to inventory depletion and pent-up demand, particularly in the semiconductor and telecom sectors. But, it continues to be a time of turmoil as the supply chain is shuffled. Credit remains tight for small and medium-sized businesses, and visibility remains poor.

The management of the laser industry is surprisingly concentrated. About 87% of laser revenues attribute to companies headquartered in just three countries: the US, Germany and Japan. Just five companies earn over 50% of the industrial laser revenues: Coherent, IPG Photonics, Newport, Rofin-Sinar, and TRUMPF. But, the top 10 industrial laser suppliers lost some market share because of their high exposure to the machine tool market. With tight credit and an uncertain economy, financial events among suppliers were limited to acquisitions of mostly small companies. Oclaro’s merger and acquisition was an exception.

There are many promising new applications on the horizon, spanning every market sector. Particularly notable are those in the medical and consumer sectors: lasers for off-the-shelf hair removal and skin rejuvenation appliances, new touch-screen display sensors, Intel’s LightPeak interface for consumer products, cataract and praesbyopia treatment, optically-assisted magnetic recording, and promising new laser technologies in the green and mid-infrared ranges.

• Laser 2010 is the 6th in a series of reports on fibre lasers and other lasers for industrial and consumer applications. Other recent reports by Strategies Unlimited cover: lasers for materials processing, ultrafast lasers, optical molecular imaging, OCT, image sensors, and LED lighting systems.