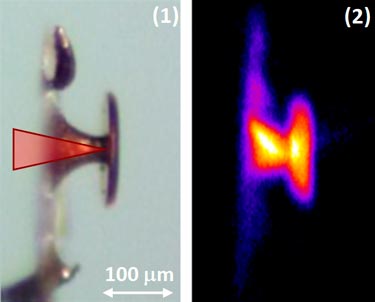 An international group of physicists working at the Los Alamos laboratory in the US has used a laser to generate 67.5 MeV protons – the highest-energy protons yet produced in this way. Their work points the way to new laser-based devices for proton therapy, which would be far smaller and cheaper than existing particle-accelerator sources.

When a high-energy proton beam travels through the human body it deposits most of its energy within a small volume, the size and location of which can be calculated to great precision. As a result, protons offer a distinct advantage over other forms of radiation used to destroy tumour cells because they cause less damage to surrounding healthy tissue. Unfortunately, the accelerators needed to generate the protons can cover thousands of square metres and cost some $100m. This has limited the number of proton-therapy facilities available and patients often have to travel considerable distances to be treated in this way.

Some physicists believe that a laser-based proton generator could be made for about one tenth of the cost of a conventional accelerator and be small enough to be contained within a classroom-sized laboratory. The idea is that ultra-powerful laser pulses knock electrons out of the atoms within a tiny target, causing the electrons to accumulate on the target's rear surface. This sets up an electric field across the target, accelerating the resultant ions and forcing them to leave the material as a very high-energy beam.

Energy is a problem

In practice, however, some of the world's most powerful petawatt (1015 W) lasers have only been able to generate protons with a maximum energy of about 58 megaelectronvolts (MeV). While tumours of the eye can be treated using protons of 60–70 MeV, deeper tumours require energies of about 300 MeV.

The latest breakthrough was carried out by Kirk Flippo of Los Alamos, Sandrine Gaillard of the Forschungszentrum Dresden–Rossendorf research centre (FZD) in Germany and colleagues, who used Los Alamos' Trident laser to generate 67.5 MeV protons. The work relies on a novel target design – an anvil-shaped piece of copper comprising a cone around 100 µm long with a 100 µm flat disc across perched on its tip. Flippo's team directed the laser beam to the inside of the cone, liberating electrons that were guided to the tip and which set up an electric field that accelerated protons away from the disc. The researchers claim that this arrangement is far more efficient than the thin films used in previous experiments – they used 80 J laser pulses, whereas the previous record of 58 MeV involved 450 J laser pulses.

Team-member Michael Bussmann of the FZD says that this significant step forward in maximum proton energy was also made possible by increasing the intensity of the main part of each pulse relative to the "pre-pulse", which precedes the main pulse and can damage the target.

However, it might take a decade or more before laser-generated protons can be used to combat cancer. Another major challenge is that Trident and the other more intense lasers simply require too much energy to be able to function at the roughly 10 Hz pulse rate needed to produce enough protons for cancer therapy.

According to Bussmann, reaching the sought-after high production rates will be a matter of getting the target right. One possibility will be some kind of refinement of the anvil shape, he says. Others, however, believe that the answer lies in reducing the size of the target, allowing electrons to be heated and ejected from the target much more quickly and therefore with a more uniform energy distribution, in other words leading to fewer low-energy electrons. "We already have enough energy in our lasers, the question is how can we use it more efficiently," says Bussmann. "Nobody has the final idea right now," he said, "but we are in a position to test all these different theories and see which works best."

Looking beyond cancer therapy, Flippo believes that such proton sources could also be used to create medical isotopes and employed to generate neutrons for research in condensed-matter physics and other areas of science. They might also be used to search for nuclear materials inside cargo, given that the characteristics of a proton beam are altered in a well defined way by radioactive substances.

The research was presented at the annual meeting of the Division of Plasma Physics of the American Physical Society, held in Atlanta on 2–6 November.