SiOnyx moves black silicon out of the lab

A new photonic material could have significant advantages for detection, imaging and power-generation applications. 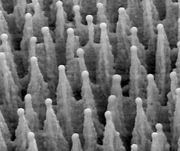 Black silicon, originally invented in a Harvard lab entirely by accident, demonstrates a broader spectral response than conventional silicon and requires a much smaller electrical bias to act as an avalanche photodiode. It combines these advantages in a very thin-layer material, producing a potentially disruptive technology for a range of applications.

"This is a photonics platform that is going to be important in detection, imaging and eventually power generation," said Stephen Saylor of SiOnyx, the company that has now licensed Harvard's black silicon patents. "It is a brand new material with brand new properties, and it is compatible with the existing infrastructure of silicon processing."

The SiOnyx process exposes the silicon target to high-intensity femtosecond laser pulses in the presence of sulphur hexafluoride. The process changes the chemistry of the silicon surface, and also transforms it from a smooth shiny wafer into a nanostructured surface absorbing almost all of the visible light striking it.

"The surface becomes covered with thousands of very ordered microspikes," said Jim Carey of SiOnyx. "We now know that the material's photonic behaviour results from a combination of the morphology and significant changes to the material chemistry. The microspikes are dramatic, but not actually critical."

The black silicon can respond to light from 400 to 2500 nm, covering wavelengths that silicon-based devices could not previously detect. In addition, the bias voltage needed to create a cascade of electrons from an incoming photon can be much lower than voltage previously needed in a silicon material.

The first area to benefit is set to be photodetectors. "In the past, photomultiplier tubes, avalanche photodiodes and intensifier tubes have used brute force mechanisms to try and detect very low signal levels," said Saylor. "We can make diodes with a better response than the best avalanche photodiodes on the market, but at a bias of just 2 or 3 V."

Such a responsive material could allow detectors in positron emission tomography and X-ray radiology to be made more cheaply and with a smaller footprint. "A more sensitive detector allows you to reduce the dosage received from an X-ray, which is a tremendous potential benefit just in socio-human terms," noted Saylor.

Consumer cameras able to take better photographs in low light could be another benefit, allowing the use of cheaper and simplified lens technology.

Black silicon's broad spectral response could also be exploited in photovoltaic cells. "For the first time we have a low-cost process allowing the generation of electron-hole pairs from the infrared wavelengths that normally pass straight through silicon," Saylor explained.

SiOnyx believes that its discovery will be disruptive in photonics technology for the long term. "It takes time to incorporate a brand new photonics platform into existing infrastructure, but we think that the technology is surprisingly resilient," said Saylor. "As with any new photonics material, in 20 or 30 years we will still be discovering new ways to improve it."

Having licensed the patents from Harvard, SiOnyx is seeking partners to adopt the technology in real-world applications. "We are more of a process development company than a product development company," commented Saylor. "Our main interest is to work with very well capitalized strategics that find this technology enabling in their product lines. For us, that's a great way for a small company to make rapid progress, by aligning with market leaders."