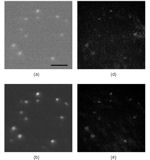 A team of US, Swiss and German scientists has found that second harmonic signals generated by a femtosecond laser can be used to produce high-contrast images with a temporal resolution of about 150 fs. The researchers believe that the new imaging technique, which they have called harmonic holography, will enable the dynamics of complex biological processes to be studied in three dimensions (Appl. Opt. 47 A103).

"To the best of my knowledge, this is the first time that second harmonic signals have been used to record holograms," Ye Pu of the California Institute of Technology told

Although a number of imaging techniques are currently used to probe biological samples, none are able to combine the high-contrast imaging needed to identify individual molecules with the ability to track fast-moving biological processes. Fluorescence microscopy, for example, has become popular for picking out specific molecules or nanostructures, but is largely constrained to two dimensions.

"Fluorescence is an incoherent process, and it is generally difficult to infer 3D information from such signals," Pu explained. "Although confocal and two-photon laser scanning microscopy do provide 3D capability, the point-scanning is too time consuming to capture dynamic events."

In contrast, holography is well known for its 3D imaging capability, and taking a number of images in quick succession enables dynamic processes to be followed in time as well as space. The problem is that conventional holography lacks contrast between what is of interest (the signal) and what is not (the background), which has so far limited its use in biological imaging.