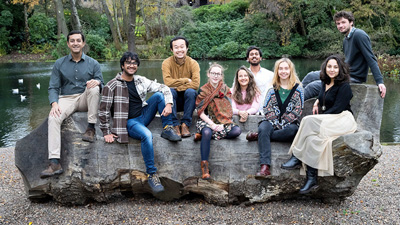 Professor Mehul Malik and his team.

Scientists at Heriot-Watt University, Edinburgh, have published what they call ground-breaking research into the phenomenon known as quantum entanglement. This is when two particles – such as photons – remain connected even when they’re separated by vast distances.

Quantum entanglement will allow future communications networks to be unhackable, say researchers at Heriot-Watt’s Institute of Photonic and Quantum Sciences. The technology can deliver the most secure form of communication possible, even if devices are unsafe or in criminal hands.

But over long distances, entangled photons can be disrupted by noisy real-world environments, such as stormy weather, background noise, or signal loss in a communications network. Problems like these can jeopardise security in a quantum network.

Working with colleagues at the University of Geneva, Switzerland, Heriot-Watt physicists have developed a way for quantum entanglement to survive and remain robust under even extreme conditions of noise and loss.

“Even the best optical fibers in the world will have a certain amount of loss per kilometer, so this is a big hurdle in making this form of quantum communication possible,” said Professor Mehul Malik, an experimental physicist and Professor of Physics at Heriot-Watt’s School of Engineering and Physical Sciences, who has been researching quantum technologies for 15 years.

“This is the first time it’s been shown that quantum entanglement can tolerate both noise and loss – and still survive in a strong form known as quantum steering.”

Professor Malik and his research team at the Beyond Binary Quantum Information Lab were able to improve the robustness of entanglement by using photons entangled in multiple dimensions (qudits), compared to the standard two-dimensional quantum units (qubits). This “high-dimensional” entanglement uses the spatial structure of light to entangle photons in a 53-dimensional space made up of light pixels.

In a test, the researchers were able to steer the entangled photons through loss and noise conditions equivalent to 79km of telecoms fiber optic cable, with 36% of white noise – noise that could come from sunlight leaking into the experiment, for example. Another finding from the research was that, counter-intuitively, increasing the number of dimensions in quantum entanglement also dramatically reduces the time it takes to measure the results, Professor Malik said.

The results of the research are published in Physical Review X.

“The efficient and trusted flow of information lies at the heart of modern society today,” Professor Malik said. “In the future, quantum networks will provide a way to have ultra-secure, high-capacity communication. To build a quantum internet, we need to be able to send quantum entanglement across real-world distances. And the only way you can do that is by tolerating noise and loss.”

He added, “Quantum technology is very much an emerging area that’s being advanced by both academia and industry, and I think our research is incredibly relevant to both. In academia, it can help advance fundamental research, and in industry, it could help future quantum networks operate over global distances.”

Unlike in conventional single mode optical fibers, in which data is transmitted through a single core, a phase separated fiber or phase separated Anderson localization fiber is made of many glass strands embedded in a glass matrix of two different refractive indexes.

During its fabrication, as borosilicate glass is heated and melted, it is drawn into a fiber, where one of the two phases of different refractive indexes tends to form elongated glass strands. Since there are two refractive indexes within the material, this generates what is known as a lateral disorder, which leads to transverse (2D) Anderson localization of light in the material.

The team of scientists, experts in quantum communications, wanted to transport quantum information as efficiently as possible through Corning’s phase-separated optical fiber. In experiment, the PSF connects a transmitter and a receiver. The transmitter is a quantum light source, built by ICFO.

The source generates quantum correlated photon pairs via spontaneous parametric down-conversion in a non-linear crystal, where one photon of high energy is converted to pairs of photons, which have lower energy each. The low-energy photon pairs have a wavelength of 810 nm. Due to momentum conservation, spatial anti-correlation arises.

The receiver is a single-photon avalanche diode array camera, developed by Polimi and MPD. The SPAD array camera, unlike common CMOS cameras, is so sensitive that it can detect single photons with extremely low noise; it also has very high time resolution, such that the arrival time of the single photons is known with high precision.

After this demonstration, the ICFO team has set out to show how to improve their results in future work. For this, they have conducted a scaling analysis, in order to find out the optimal size distribution of the elongated glass strands for the quantum light wavelength of 810 nm.