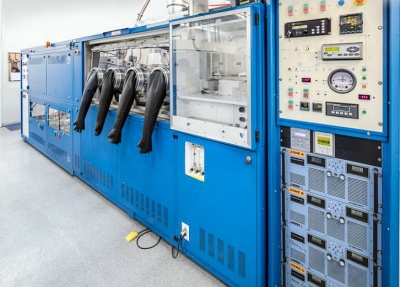 According to Ganvix, which is also working with researchers at Taiwan’s Industrial Technology Research Institute (ITRI), the novel approach enables fabrication of VCSELs entirely from epitaxially grown GaN without introducing any crystalline defects or lattice mismatch.

“Surface-emitting lasers require distributed Bragg mirrors (DBRs) to enable their unique properties, and while highly successful in other materials, have been prohibitively difficult to fabricate in GaN,” explained the Sydney-headquartered company.

AR/VR headset displays
Green VCSEL are expected by some to find significant market applications across the consumer electronics, industrial and medical sectors - perhaps most obviously in augmented and virtual reality headsets, where the tiny size of the emitters would be an advantage.

Ganvix has said previously that “near-term” applications of its technology could include red, green, and blue VCSEL light engines for laser scanning displays, and laser arrays for free-space and optical communications using polymer fibers.

“There are many high-growth markets for this exciting technology, including advanced applications such as augmented and virtual reality headsets, pico projectors, and 5G wireless communications.”

“This collaboration highlights the significant competitive advantages of RPCVD, which transform how GaN lasers are made to improve performance.

“Our collaboration with Ganvix will advance our RPCVD roadmaps and expands our market opportunity. Importantly, the collaboration complements our own product and commercialization roadmap, which is focused on edge-emitting laser diodes.”

Under the terms of the agreement BluGlass will initially receive payment for its services, with the potential for further purchases if the commercialization effort proves successful.