U Penn develops optical method to detect O2 use in brain

To obtain a detailed picture of cerebral metabolic rate of oxygen consumption. 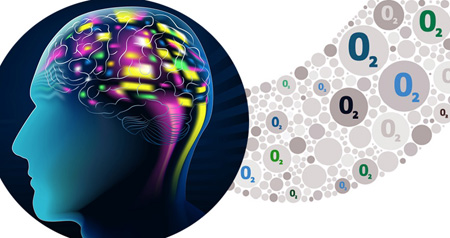 Measurement of the cerebral metabolic rate of oxygen consumption.

Cerebral metabolic rate of oxygen consumption (CMRO2), which indicates how much energy a human brain is consuming at a given time, is a key index of brain activity. Direct quantification of CMRO2, is a significant objective in neurology, as it is a valuable measure of tissue pathology in steady-state conditions, such as those associated with cancer, traumatic brain damage, and stroke.

Moreover, its dynamic measurement during neuronal activity can reveal the metabolic processes underlying the brain’s functional responses. Although some current methods enable quantification of CMRO2, generally they do not provide information about the relative timing of metabolic events and vascular responses.

To gain a clearer picture of CMRO2, during brain activity, researchers from the University of Pennsylvania developed a novel optical technique. As reported in the SPIE journal Neurophotonics, this technique uses a pair of macromolecular phosphorescent probes with demonstrated application for the real-time monitoring of CMRO2, concurrently with cerebral blood flow in a preclinical animal model.

“Most current approaches for dynamic tracking of CMRO2 are based on measurements of hemoglobin oxygen saturation and CBF, such that CMRO2 dynamics becomes inherently tied to the dynamics of CBF. We wanted to develop a method free of this limitation,” said Prof. Sergei A. Vinogradov, the study’s principal investigator.

The technique directly probes the brain’s oxygen gradient. The oxygen gradient depends on the difference between oxygen concentrations inside the brain’s blood vessels (intravascular) and in the immediate vicinity of the brain cells (extravascular). When brain cells become more metabolically active, they consume more oxygen, making this gradient steeper. Thus, this gradient carries information about how much oxygen is being consumed and can be used to determine the CMRO2.

The key step was to find a way to concurrently measure the difference between the extravascular and intravascular oxygen levels. For this, the researchers injected one phosphorescent probe, called Oxyphor PtR4, into the blood, and another probe, Oxyphor PtG4, was administered directly into the space between the blood vessels.

The two Oxyphors have different colors, and by using two different lasers the team could measure the probes' signals simultaneously with temporal resolution of ~7 Hz. The technique was applied to a preclinical model, and they demonstrated real-time computation and tracking of CMRO2 during functional activation of the brain. Using a third laser, the researchers also succeeded in measuring CBF in parallel with CMRO2 using the method called laser speckle contrast imaging.

Associate Editor Prof. Andy Shih, a principal investigator at Seattle Children’s Research Institute’s Center for Developmental Biology and Regenerative Medicine, said, “This clever development and use of probe pairs in the intra- and extravascular compartments opens the door to measurements of brain oxygen consumption.”

Prof. Arjun Yodh, the other corresponding author of the study, explained, “Our scheme offers an opportunity to directly observe changes in brain metabolism in real time and to concurrently compare vascular responses to metabolism responses. As technology develops, we anticipate that the method will become more broadly available for testing drugs and other effectors of brain metabolism, and it should permit more rigorous examination of metabolism models.”

Indeed, the study is the first to demonstrate the ability to monitor local blood flow and tissue oxygen gradients in real-time while the brain is functionally active. It opens up new possibilities for the dynamic measurement of brain metabolism by revealing additional details regarding the physiological processes accompanying neuronal activity.