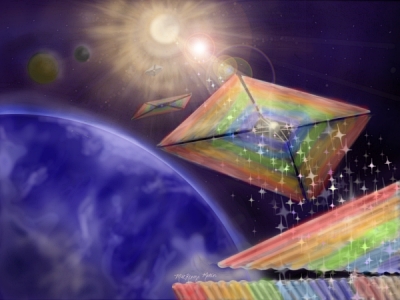 NASA has funded further development of a new type of solar sail relying on diffractive optics, with the ultimate aim of a demonstration mission in space.

The “Diffractive Solar Sailing” project has been selected for “Phase III” study under the agency’s Innovative Advanced Concepts (NIAC) program, with $2 million of support.

The Phase III projects aim to transition concepts with the highest potential impact for NASA and its partners, with NASA Administrator Bill Nelson saying:

“As we venture farther out into the cosmos than ever before, we'll need innovative, cutting-edge technologies to drive our missions. The NASA Innovative Advanced Concepts program helps to unlock visionary ideas - like novel solar sails - and bring them closer to reality.”

Diffractive design
While the concept of a solar sail is nothing new, existing designs are based on reflective materials that are able to harness the tiny amount of propulsive pressure exerted by sunlight.

Those sails are typically very large and very thin, so that they can convert as much solar pressure as possible into propulsive momentum. However, they are also limited by the direction of sunlight, resulting in trade-offs between power and navigation.

In contrast, diffractive lightsails would feature tiny gratings - possibly based on metamaterials - embedded into thin optical films. NASA says that this would allow the spacecraft to make more efficient use of sunlight without sacrificing maneuverability.

The Phase III award gives the research team $2 million over two years to continue technology development in preparation for a potential future demonstration mission, and is being led by Amber Dubill from the Johns Hopkins University Applied Physics Laboratory in Laurel, Maryland.

Earlier development under Phase I and Phase II awards had been led by co-investigator Grover Swartzlander from the Rochester Institute of Technology, with Dubill and Swartzlander co-authoring a recent journal publication entitled “Circumnavigating the sun with diffractive solar sails”.

In the abstract for that paper, the pair wrote that they “envision placing a constellation of diffractive solar sails around the sun to collect images and other data for space weather monitoring and heliophysics science”.

They added that the approach could inspire materials scientists to design and fabricate thin optical metamaterial films that efficiently diffract light at large angles across the solar spectrum for future solar sails. “Mission designers may also be prompted to imagine alternatives beyond reflective sails,” they wrote.

Heliophysics potential
In a NASA release, Mike LaPointe, acting program executive for the NIAC program, said: “Our goal is to change the possible, and diffractive solar sailing promises to do just that for a number of exciting new mission applications.”

Under the previous awards, the development team designed, created, and tested different types of diffractive sail materials, and designed new navigation and control schemes for a potential diffractive lightsail mission orbiting the poles of the sun.

Work under Phase III will seek to optimize the sail material and perform ground tests in support of a conceptual solar mission.

NASA explains that orbits passing over the solar poles are difficult to achieve using conventional spacecraft propulsion, whereas lightweight diffractive lightsails could place a constellation of science spacecraft in orbit.

“Diffractive solar sailing is a modern take on the decades old vision of lightsails,” commented Dubill. “While this technology can improve a multitude of mission architectures, it is poised to highly impact the heliophysics community's need for unique solar observation capabilities.

“With our team's combined expertise in optics, aerospace, traditional solar sailing, and metamaterials, we hope to allow scientists to see the sun as never before.”

Unlike a conventional reflective sail, a diffractive sail would experience a certain amount of force perpendicular to the direction of sunlight, meaning that a spacecraft could navigate without sacrificing the amount of solar power on the sail.

It is also thought that the angular deviation of light from a diffractive film could be engineered to provide electronic, rather than mechanical, navigation protocols, for example with electro-optic beam steering.