$1 million joint funding from SPIE and university to establish Glasgow as internationally recognised center of excellence for quantum. 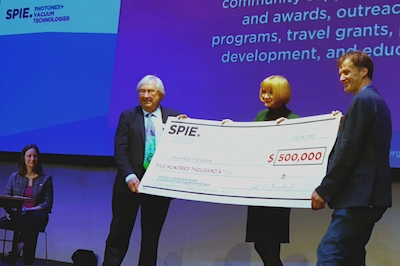 Glasgow University has today announced the launch of a dedicated quantum technology facility with a mission to develop new projects and become a future “center of excellence”.

The Centre for Quantum Technology aims to build on its expertise and experience as currently one of the largest quantum centres in the UK, to boost economic and societal benefits for Scotland as well as consolidating its research and teaching base.

This announcement follows last year’s agreement between SPIE, the international society for optics and photonics, and the university on a $1M quantum photonics program; with each party contributing $500,000. The SPIE Early Career Researcher Accelerator Fund in Quantum Photonics is intended to support collaborative early-career research (see below).

Today’s announcement was made at SPIE’s Photonex and Vacuum Technologies conference and exhibition, taking place in Glasgow, through 30 September.

The quantum center is intended to help with R&D of new projects, such as gravity detectors the size of golf balls, precision cameras with which see inside the human body, and new forms of secure communications. The launch of the center is the latest development for quantum research at Glasgow. It already leads QuantIC, the UK Quantum Technology Hub in Imaging, which was launched in 2014 as part of the £1 billion UK National Technologies Programme.

Glasgow researchers also contribute to the three other Quantum Technology Hubs launched at the same time and are currently working with more than 50 industrial partners.

Professor Padgett commented, “We’re proud to be officially launching the Centre for Quantum Technology at the SPIE Photonex + Vacuum Technologies conference today. Over the past decade, the University of Glasgow has grown quantum research activity to become one of the largest quantum centres in the UK.

“The university is home to many of the leading engineers, physicists, and computing scientists working within quantum research in the UK. The technology they are pioneering has wide-ranging applications across physical and biological sensing and imaging, secure communication, and advanced computing.

“The centre aims to further build on these strengths and develop new commercial partnerships, translate fundamental research into new products, and to attract and retain the best researchers and students to the city.”

“We are delighted to have the support of the SPIE Endowment Matching Program to help us encourage the next generation of quantum researchers in academia and in industry. We are looking forward to welcoming the programme’s first inductees to our new Advanced Research Centre, set to open next year, which will be home to many of our quantum research projects.”

The university’s James Watt Nanofabrication Centre and its commercial arm, Kelvin Nanotechnology Ltd, have helped create many of the components which work within quantum technologies in computing, imaging, communications, and sensors.

When the SPIE Endowment Matching Program was announced in 2020, then SPIE President John Greivenkamp commented: “We are delighted to be participating in these exciting endeavours with the University of Glasgow.

“The interactive placements will offer transformative opportunities for the university’s academic and industry-based researchers, and, together with the annual scholarship, will develop well-prepared, knowledgeable early-career researchers who will drive the future of the quantum industry.”