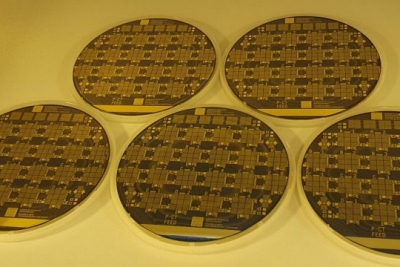 IQE, the London-listed manufacturer of epiwafers critical to the production of optoelectronic devices, has reported half-yearly revenues of £79.5 million - down from £89.9 million 12 months ago.

The decline largely reflects recent fluctuations in exchange rates, says the firm - in particular the weaker US dollar. At constant currency valuations, the sales total would have been down only slightly on last year’s figure.

VCSEL shrinkage
While sales of wafers used to make radio frequency amplifiers for phone handsets rose sharply in the first half of 2021, IQE’s photonics division reported £35.4 million in revenues - down 20 per cent from £43.4 million for the same period last year.

Equivalent to an 8 per cent decline in revenues when calculated at constant currency rates, that total reflected a key change in the market for vertical-cavity surface-emitting lasers (VCSELs).

IQE explains that its market share in the VCSEL sector remains strong, but that revenues had dropped sharply alongside customer demand to shrink chip sizes for deployment in smart phone facial recognition applications.

However, the company says that it has made some market gains in “world-facing” VCSEL lidar technology, and points to good progress in the development of longer-wavelength VCSELs for so-called “below screen” applications in handsets with more advanced displays, as well as in optical sensors for emerging healthcare applications.

The “DN” element of that product nomenclature is shorthand for “dilute nitride”, which refers to the semiconductor material system used by IQE to access longer wavelengths without the need to switch from GaAs to much more expensive indium phosphide (InP) wafers.

“It is desirable to increase this wavelength to 1380 nm [and beyond], thereby allowing this technology to be applied to below screen (BOLED) consumer applications such as facial recognition systems for mobile devices,” explained IQE back in March.

“There is significant customer demand for breakthrough technologies like these because they enable new applications and improve device performance while at the same time reducing cost.

“Additionally, the move to longer wavelengths will make it even simpler to safely deliver emerging technologies, such as lidar for automotive applications.”

CEO succession
IQE adds that it has now identified a candidate to succeed its long-standing CEO Drew Nelson, who revealed plans to move on from the lead executive role last November.

“[The] process for the recruitment of a new CEO is nearing completion with a preferred candidate identified, who possesses relevant international semiconductor market experience,” the firm announced. “Discussions are ongoing with the aim of concluding the appointment process.”

In the meantime, Phil Smith has stepped in as interim executive chairman, with Nelson shifting to company president and a non-executive director role.

Nelson, who founded EPI - the company that subsequently became IQE - back in 1988, says that he will continue in an “ambassadorial and advisory” role at the firm.

“As I now formally step aside as CEO, I am extremely proud of everything we have achieved at IQE to date and the critical role the business plays within the broader global industry, and Compound Semiconductor Cluster in South Wales,” he added.

Smith said: “Thanks to Drew Nelson’s vision and drive, IQE has established a solid platform with strong market positions and global leadership in compound semiconductors.

“I share his enthusiasm for the future opportunities that lay ahead for IQE and I want to thank him for his incredible contribution to the business.”

“As part of my expanded role, I will focus on the execution of IQE’s strategy and preparing the business for the arrival of the incoming CEO.”

• With the negative currency effects expected to continue, the IQE team is currently anticipating that its full-year sales for 2021 will end up at similar levels to last year’s total, on a constant-currency basis.

That and a similarly flat outlook for company profits appeared to disappoint investors, with IQE’s stock price dropping by around 10 per cent on the London Stock Exchange.