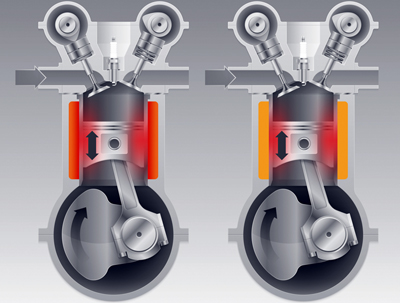 Engineers at the Fraunhofer IWS (Institute for Material & Beam Technology), Dresden, Germany, are working to achieve a reduction in the fuel consumption of cars by more than a tenth. To achieve this they are using ultra-short laser pulses to generate fine and friction-reducing “fishbone” patterns in engines.

Dr Udo Klotzbach, from the IWS, estimates that if selected individual parts in combustion engines were treated with this process, cars could save several percent of an engine’s consumption of gasoline or diesel.

"If we also use it to machine plain bearings, rolling bearings and other moving vehicle parts and calculate this for the entire car, we can even achieve savings in the double-digit percentage range."

This technology could also significantly reduce losses in electric cars and other machines. Dr Klotzbach added, "In addition, the components last about 30 percent longer on average."

When the pistons in a car engine move up and down, typically several thousand times a minute, they rub against the inner wall of the cylinder. This friction slows them down, wastes kinetic energy and ultimately also fuel. In addition, small material losses and deformations damage the engine over time – up to the point of the notorious "piston seizure".

In fact, engineers have calculated that friction alone wastes up to seven percent of Germany's entire economic output. Similar friction problems arise in many types of machine, including locomotives and milling machines. Even the latest electric cars waste part of their battery charge through friction in the electric motor and other moving parts.

Forecasts indicate that friction and the associated wear consume two to seven percent of Germany's annual economic output. Although friction cannot be completely avoided, however, it can be reduced. As an example, IWS experts have tested their anti-friction technologies on piston rings. Such rings enclose the engine pistons like a seal to keep lubricating oil away from the combustion chamber.

A new feature is photonic structuring: lasers emit very short but high-energy light pulses. Scientists thus generate a few micrometers (thousandths of a millimeter) of small holes on the piston rings. As a result, patterns are created that are barely perceptible to the naked eye but look like drainage channels or fishbones under the microscope.

These bone patterns have two functions, explained Dr Klotzbach: "On the one hand, they reduce the areas that can rub against the cylinder wall at all. On the other hand, the channels direct the engine oil to the areas where the greatest frictional losses normally occur. In a sense, if we stick to the fishbone, its spine is the channel through which new oil flows when needed." This causes a protective oil film to float between the ring and the inner wall of the cylinder at all times when the engine is running.

However, the laser must generate the bone pattern with high precision without producing sharp burrs. This is why IWS scientists also employ the ultra-short pulse lasers mentioned above: These lasers emit light pulses that often only last 500 fs. In comparison, two trillion such pulses are needed until a whole second has passed. "Because these pulses are so short, the material hardly heats up," said Dr. Klotzbach. "There are virtually no undesired effects on the material."

In the meantime, Fraunhofer engineers have also developed laser speeds that allow the technology to be used in mass production. They are now testing this process together with partners from the automotive industry. IWS scientists are also exploring other applications for their micro fishbones, for example in mechanical engineering and for sports equipment.