Novel approach to separation and creation of new phases could lead to new ways of manipulating matter and making crystals.

Laser treatment: to achieve control of nucleation (right), including the type of crystal produced.

Scientists have managed to separate two liquids in a mixture using a laser, which they claim will lead to new ways of manipulating matter and creating crystals for industry.

In a paper published today this week in Nature Chemistry, researchers from the University of Glasgow, UK, present a novel approach to separate and create new phases using a simple laser.

The precise production of crystals is critically important in science and technology as crystals are used in computers, phones, drugs, paints, light bulbs, solar cells and more. However, producing the right type of crystal is critical.

The Glasgow scientists comment, “We currently lack the ability to fully control the crystallisation process and this can lead to extremely costly problems in industry”.

In the new approach, a laser is used to harness fluctuations associated with a so-called critical point and to drive the system towards a phase separated state. This was demonstrated using a simple liquid mixture.

Prof. Klaas Wynne, who designed and developed the approach, said, "In our experiments, we used a simple mixture of two liquids and a relatively low power laser diode to suck one of the liquids out of the mixture. So it's a little bit like making a cup of tea, stirring in some milk, and then using a laser to suck the milk out again. It may seem rcounter-intuitive but it's all within the laws of physics."

Finlay Walton, who carried out the work, explained that, “These are the first steps towards a full understanding of the role that critical fluctuations play in crystal nucleation. Our aim is to gain full control over nucleation, including the type of crystal that is produced.” This research is funded by a grant from the UK’s Engineering and Physical Sciences Research Council (EPSRC). 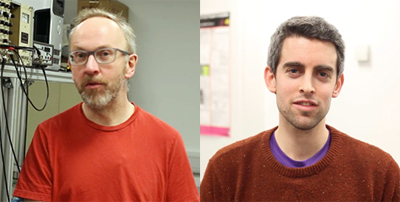 The Nature Chemistry paper is entitled “Control over phase separation and nucleation using a laser-tweezing potential” and its abstract states:

”Control over the nucleation of new phases is highly desirable but elusive. Even though there is a long history of crystallization engineering by varying physicochemical parameters, controlling which polymorph crystallizes or whether a molecule crystallizes or forms an amorphous precipitate is still a poorly understood practice.

”Although there are now numerous examples of control using laser-induced nucleation, the absence of physical understanding is preventing progress. Here we show that the proximity of a liquid–liquid critical point or the corresponding binodal line can be used by a laser-tweezing potential to induce concentration gradients.

“A simple theoretical model shows that the stored electromagnetic energy of the laser beam produces a free-energy potential that forces phase separation or triggers the nucleation of a new phase. Experiments in a liquid mixture using a low-power laser diode confirm the effect. Phase separation and nucleation using a laser-tweezing potential explains the physics behind non-photochemical laser-induced nucleation and suggests new ways of manipulating matter.”