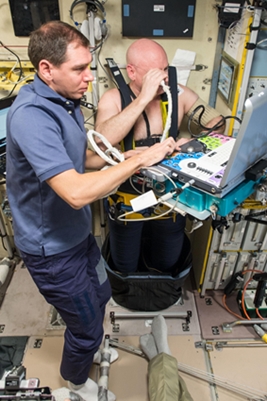 by Ford Burkhart
In microgravity, astronauts experience head-ward fluid shifts and, while the long-term effects of these shifts are unknown, they could give rise to neuro-inflammation. NASA has reported that up to 60 ounces of fluids - the equivalent of several large bottles of water - can flow from the legs to an astronaut’s head while in orbit.

NASA is studying the apparent effect, noting that more than half of US astronauts have experienced vision changes and anatomical alterations to parts of their eyes during and after long-duration space flight.

"It is hypothesized that the head-ward fluid shift that occurs during space flight leads to increased pressure in the brain, which may push on the back of the eye, causing it to change shape," the space agency reports.

Perhaps more significantly, the Texas team is using NIRFLI to understand how lymph hearts, which wear out over time, are implicated in a variety of chronic conditions. The University of Texas Health Science Center is also looking to commercialize the imaging technique.

In a bid to resolve the mysteries of how exactly the lymphatic system operates, Sevick is attempting to cast some light on the links between gravity, lymph vessels, and the immune system. Her team is tackling those issues thanks to a new co-operative grant received from NASA, to understand lymphatics in space.

“If we find that microgravity-induced head-ward fluid shifts are caused by the lymphatics, then we need countermeasures for long spaceflights needed to get to Mars,” Sevick said last week in a panel session held as part of SPIE’s Photonics West conference in San Francisco.

Wider understanding
During the event, organized by the International Biomedical Optics Society (IBOS) and chaired by Jennifer Barton from the University of Arizona and Wolfgang Drexler from the Medical University of Vienna in Austria, Sevick told attendees: “The [wider] goal, of course, is to use NIRFLI to understand how lymph, which is crucial to our immune system, is transported through the lymphatic vasculature.”

NIRFLI will reveal how defective lymphatics may be linked to “some of our most prevalent and costly chronic conditions,” predicted Sevick. Effective treatments to disorders associated with ageing, including Alzheimer’s disease and rheumatoid arthritis, could involve strategies to alter the “lymph heart” pumping function.

For example, Sevick’s team has shown that lymph hearts are arrested in rats with rheumatoid arthritis. Yet when Etanercept, an Amgen-developed anti-inflammatory drug used to treat rheumatoid arthritis, is delivered directly into the lymphatic system, lymph pumping is “re-started” and disease symptoms are alleviated more effectively than when the drug is injected using conventional needles. Future studies with human patients are in the works, Sevick said.

“We will need to use NIRFLI as a companion diagnostic to monitor these and other strategies to modify the immune system,” said Sevick, who is also director of the Center for Molecular Imaging at the University of Texas’ McGovern Medical School.

Until now, a lack of imaging technologies has limited development of effective therapeutic strategies, she told attendees of the panel session, adding: “Now that has changed.”