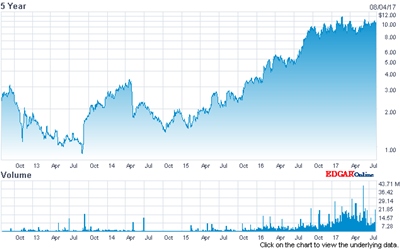 Oclaro, the Nasdaq-listed provided of photonic components and modules used primarily in high-speed communications, has closed out what its CEO Greg Dougherty described as a “remarkable” financial year by posting record sales and profits.

Spurred in recent months by growing demand from data center build-outs and upgrades, the company delivered a net income of $128 million on sales of $601 million for the 12 months ending July 1 – compared with $9.4 million and $408 million in the prior year.

“These tremendous results were driven by our 100G and beyond product portfolio, which doubled in revenue over 2016,” Dougherty said. “I am very proud of the Oclaro team for delivering such outstanding financial performance as 2017 was indeed a great year.”

China headwind
In the latest quarter that shift to 100G and beyond was much in evidence, with the high-speed technology accounting for more than 80 per cent of the firm’s sales.

The Q4 total of $149 million was achieved despite an 18 per cent sequential slump in demand from China, where the CEO said there was “limited visibility” about future purchases. As a case in point, the latest fiscal year saw US-based Cisco Systems overtake China’s Huawei as Oclaro’s largest single customer.

Dougherty expanded: “While we continue to expect a healthy market in the Americas and a slower China market for us over the next couple of quarters, we still believe the fundamental demand drivers in China remain intact. We anticipate growth from the region to return again later this fiscal year, driven by new metro and provincial network deployments.”

5G build-out
He is also expecting the migration to “5G” wireless network infrastructure to have a positive knock-on effect, pushing adoption of both 25G and 100G optical transceivers from early 2018, when network specifications and specific optical component requirements are decided.

“We are well positioned to serve what could be a very significant new market for Oclaro due to these transceivers requiring industrial operating temperature range,” the CEO told an investor conference call. “Our laser chip and packaging technologies enable us to address this requirement and differentiate ourselves in this market.”

While Dougherty and his team are predicting a slight sequential rise in revenues in the current quarter, the China slowdown and other “headwinds” are expected to have an impact in the closing quarter of the calendar year.

On the plus side, data centers in the US are expected to continue providing plenty of business, with Oclaro sole-sourced on a major metropolitan network build-out by Verizon. “North America has been solid for us for several quarters in a row now. And we expect it to continue to be solid,” the CEO said.

The positive developments and much higher profitability over the past year have had a significant impact on the company's balance sheet, with Oclaro now listing $219 million cash, up from $96 million a year ago.