ESI in the groove after sales target is aced 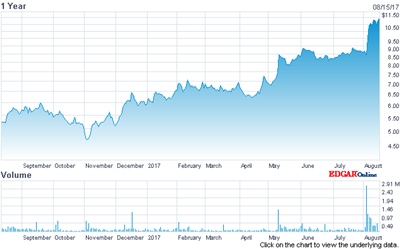 The stock price of laser microfabrication system vendor Electro Scientific Industries (ESI) has continued to rise since the company released its latest financial results earlier this month, adding 30 per cent to the value of the Oregon firm in just two weeks.

Closing at $10.93 on the Nasdaq index August 14, ESI’s stock has doubled in value since August last year, when current CEO Michael Burger was appointed. Burger replaced Ed Grady in the lead executive role, and it appears that the series of changes implemented by both CEOs are now bearing fruit.

Guidance smashed
At $72.7 million, ESI’s sales in the three months ending July 1 were up 52 per cent on the year-ago period, and way above prior guidance that had indicated revenues in the “low $60 million range”.

The Portland-headquartered company also swung to a net profit of $2.9 million, despite some significant costs related to its recent down-sizing in North America that has seen facilities in Montreal and Napa closed.

“We're seeing literally every part of our business kind of rise,” Burger told an investor conference call to discuss the results. “And I think that is a general statement that the overall economy in general is hotter than any of us expected. I think that has had an acceleration effect on the consumer electronics space.”

Among the laser-based products helping to turn the company’s fortunes around are its “Gemstone” system for flex drilling. Used in smart phone production, it features a nanosecond-pulsed ultraviolet laser, with orders currently said to be “very, very strong”.

Also gaining traction is the newer “Ultrus” system, which is based around a mode-locked ultrafast source and is used to groove and scribe semiconductor wafers. ESI’s “nViant” system, used for via hole drilling in electronics manufacturing and with a 3 kW carbon dioxide laser on board, is attracting more attention.

Turning to the recent restructuring efforts, Burger told investors that the sweeping changes were nearly complete, with a number of key functions now relocated to China and Singapore.

Vertical integration
One of the key elements of the strategy is vertical integration, and to use more of ESI’s internally developed rod-shaped fiber lasers in its microfabrication systems. Developed in Bordeaux initially, those lasers are now being manufactured in Singapore, with the reliability of the unusual designs said to be improving under the focus of a dedicated team.

At the moment, around a third of ESI’s laser systems feature internal laser sources, with Burger and colleagues aiming to raise that proportion to more than half in the future.

The CEO and his executive team are predicting that sales in the current quarter will end up somewhere between $63 million and $70 million, down slightly on a sequential basis as the typical seasonality of their key end markets kicks in.

But with opportunities emerging in the area of organic LED (OLED) displays, where new laser drilling processes are finding use, investors have reacted positively to the outlook.

Having jumped around 20 per cent immediately after the results were released, ESI’s stock price has continued to rise in value. In early trading on August 15, it tipped above the $11 mark, close to a four-year high and equivalent to a market capitalization of around $370 million.