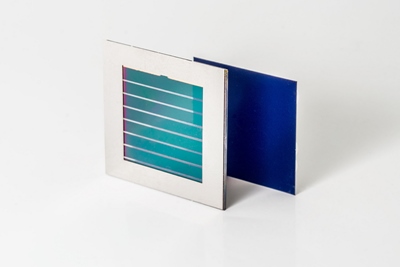 Photovoltaics researchers in Europe have built a small-scale perovskite-silicon tandem module with a conversion efficiency of close to 24 per cent.

The milestone, achieved by a team at imec in Belgium as part of the Solliance consortium, demonstrates that the combination of old and new photovoltaic materials is able to outperform some conventional silicon modules – at least with a small-area cell measuring 4 cm2.

“Reaching this level, imec is the first to achieve a module-on-cell stack that outperforms the standalone silicon solar cell,” announced the team, explaining that the perovskite element boosts PV performance in a tandem arrangement when it is engineered to absorb a spectral range complementary to that of silicon.

The development with collaborators at Solliance improves on the previous best of 20.2 per cent conversion, using a cell of the same size.

“First, a different perovskite material (CsFAPbIBr) was used, largely improving the stability and conversion efficiency of the 4 cm2 semi-transparent perovskite module to 15.3 per cent,” he reported. “Second, the architecture of the stack was optimized for minimal optical losses by adding an anti-reflection texture on top of the module and a refractive index matching liquid between the perovskite module and the silicon solar cell.”

Aernouts adds that matching the areas of the two materials makes the development more attractive in terms of manufacturability, although the performance has been pushed further with an even smaller perovskite element.

“For reference, we have also fabricated a stack of a small perovskite cell (0.13 cm2) on top of an IBC (interdigitated back contact) crystalline silicon cell (4 cm2),” he said. “In this configuration, the power conversion efficiency of the small semi-transparent perovskite cell is 16.7 per cent, outperforming the larger 4 cm2 perovskite module due to better perovskite layer properties. Although less attractive from an industrial point of view, the overall power conversion efficiency of this cell-on-cell stack is as high as 25.3 per cent.”

Stability required
The emergence of perovskite was one of the themes covered by leading PV researcher Michael Grätzel in a plenary address at the SPIE Optics+Photonics conference held in San Diego, California, last week.

Switzerland-based Grätzel, director of the Laboratory of Photonics and Interfaces at the Ecole Polytechnique Federale de Lausanne (EPFL), made a forceful case for designing solar systems around the new generation of mesoscopic light-absorbing materials, where particle sizes are in the nanometer-to-micrometer range.

This size means that the materials exhibit both quantum and macroscopic phenomena, offering a new route to high-efficiency solar light harvesting with abundant, low-cost materials.

Showing off “green” products including a solar backpack and portable electronic charging devices, and highlighting a solar fence on a street in Lausanne capable of charging up an electric car, Grätzel said: “What you have seen is mesoscopic photovoltaics and how they have generated new markets.”

Mesoscopic architecture is the backbone of “third generation photovoltaics,” he added, where several hundred times less material is required than with the silicon-based solar cells now widely deployed on rooftops around the world.

Perovskite cells have seen rapid development that has stunned the PV community, Graetzel noted, adding that although efficiencies are now pushing above that of silicon, there is still work to be done to make the new devices with the kind of stability needed for commercial deployment.