The research has been carried out by King’s College London alongside Rheinische Friedrich-Wilhelms-Universität Bonn, Germany, and is published in Nano Letters.

When light hits an object, the colour, texture, and shape of that object affect how the light is absorbed and reflected, allowing a viewer to perceive the object. By altering the surface to change how light is reflected, it is possible to manipulate how it appears.

The KCL and Bonn researchers developed layered materials, incorporating precisely designed nano-features smaller than the wavelength of light, called metasurfaces. This allowed them to precisely control how light is reflected, so that a 2D surface reflects light just as a 3D object would.

Borrowing a technique from 3D computer graphics called Normal Mapping, researchers encoded shadow effects into the image, creating 3D images said to be “more realistic than holograms or 3D cinema”. As a proof of concept, the researchers fabricated a flat metasurface imitating lighting and shading effects of a 3D cube (see above).

The researchers commented that the technique “could have huge implications for the optical industries, including in TV screens and photography, as well as in security labels for protecting goods and banknotes from counterfeiting.”

Professor Anatoly Zayats of KCL said, “Metasurfaces are amazing. They open up unprecedented freedom in directing and manipulating light. One might ultimately imagine a TV screen which appears exactly the same as you move around it, or a new movement of 3D art.”

The ability to control light could bring new functionality to small camera lenses. A flat surface can be made to appear optically convex by designing appropriate metasurface properties. Future generations of smartphone cameras could use the tiny flat metasurfaces to mimic the properties of sophisticated curved camera lenses, allowing much greater control of angle and depth field.

“Metasurfaces could also replace heavy optical lenses in applications such as satellites, where weight and size have a big impact on efficiency.”

More immediately, the novel nano-materials can already be used to create unique complex 3D images for security and anti-counterfeiting applications, as well as for new measurement applications requiring precise control of light. 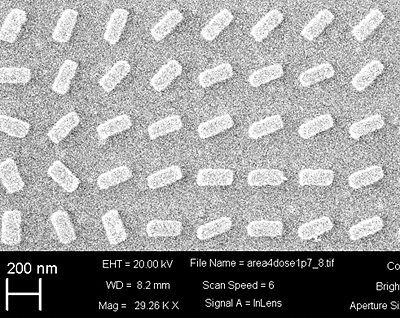 SEM image of the fabricated metasurface.

The researchers added that the metalens-formed image is “much more than a hologram”. Unlike holograms, which require a coherent light source such as a laser to be viewed, these surfaces manipulate the reflection of normal light so they appear as a realistic 3D object in any light condition and from any angle.

For the proof of concept, the researchers designed a cube using the normal mapping technique, which was encoded into the metasurface. When illuminated, the metasurface instantaneously “computes” how a 3D representation of the image should look and displays it.

Dr Alexander Minovich, The Royal Society Newton International Fellow at King’s College London, commented, “The normal mapping demonstrated with our metasurface is a completely new concept, but it could have very important implications for a wide range of optical industries, both in introducing new functionality and making products smaller and lighter.”