Initial three-telescope array could be expanded to 15 interconnected facilities under ‘BlackGEM’ scheme. 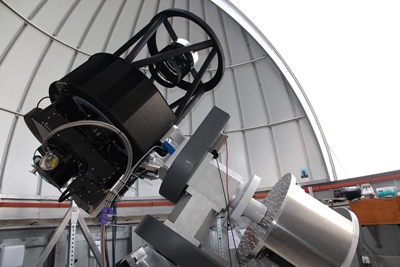 In the same week that senior members of the team behind the first direct detection of gravitational waves won the Nobel Prize in Physics, the European Southern Observatory (ESO) has revealed plans to build an array of up to 15 optical telescopes to observe the cosmic events creating the waves.

With the two US facilities that make up the Laser Interferometer Gravitational-Wave Observatory (LIGO) now complemented by the similar Virgo detector in Italy, astronomers are able to pinpoint the source of gravitational waves much more precisely than before.

And although only four gravity-wave events have been confirmed thus far, both LIGO and Virgo are now being upgraded with more sensitive detectors – meaning that many more such events are likely to be recorded in the future.

Optical G-wave follow-up
The space-time ripples sensed by the LIGO and Virgo instruments will relate to phenomena including collisions between black holes and neutron stars, as well as supernovae.

The four confirmed events have all been black-hole collisions, but there is strong suspicion that the LIGO/Virgo collaboration will shortly reveal that they have recently captured evidence of a neutron-star collision – an event generating electromagnetic radiation that could also be captured by more conventional telescope equipment, provided astronomers know exactly where to look.

ESO says that it has now signed up an international consortium of institutions to build the "BlackGEM" array of telescopes at its La Silla Observatory in Chile. “BlackGEM will contribute to the study of merging black holes and neutron stars, and the agreement with ESO will ensure that this exciting new telescope array benefits from one of the best observing sites and associated facilities in the world,” ESO announced.

“BlackGEM will look for these events in visible light, following up detections of the characteristic gravitational waves arising from the merging of these highly exotic objects.” Initially the array will comprise three interconnected telescopes, although the long-term plan is to expand that number to 15.

Detecting a transient optical signal in the wake of a gravitational-wave from the same cosmic event would enable astronomers to pinpoint the sources responsible for the gravitational waves. That would in turn allow larger telescopes to carry out more detailed observations, providing unprecedented insight into some of the most extreme events that take place in the Universe.

But that won’t be BlackGEM’s only function. The array will also serve as a highly capable survey telescope observing the southern skies.

Detailed picture
Paul Groot, principal investigator of the BlackGEM project, said: “The recent momentous detections of gravitational waves from merging pairs of black holes give added impetus to the BlackGEM project, which will allow us to investigate further the events that give rise to gravitational waves. We can look forward to obtaining a detailed picture of some of nature’s most powerful events.”

Scheduled to be operational by September 2018, BlackGEM will be an extension of the prototype “MeerLicht” telescope that is expected to begin scientific operations in South Africa shortly.

Each of the 0.65 meter-diameter BlackGEM telescopes is based on a Wynn-Harper design and features a 110 megapixel CCD camera, delivering a square field of view of 2.7 degrees.

According to a consortium presentation, the plan is to make data from the fast-reacting array available almost instantly, creating a live “database” of any transient astronomical phenomena available via the so-called “BlackCloud” facility.

The BlackGEM team is headed up by principal investigator Paul Groot from Radboud University, alongside members of the Netherlands Research School for Astronomy (NOVA) and partners at Manchester University in the UK, KU Leuven in Belgium, three major universities in Israel, the University of Canterbury in New Zealand, and the University of California, Davis.

According to the planned schedule, the first three BalckGEM telescopes should be shipped to Chile next summer, with operations set to begin shortly afterwards. That timing should coincide with the third observing run carried out by the giant laser interferometers at LIGO and Virgo, whose detector upgrades are expected to take about a year to complete.