Past president wins the society’s most prestigious award for biophotonics work including cancer diagnostics. 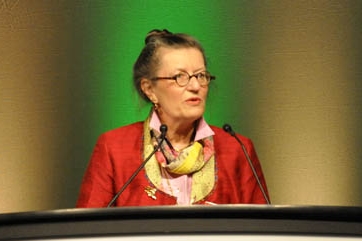 SPIE has awarded Katarina Svanberg, the biophotonics expert and consultant oncologist at Lund University Hospital in Sweden, its top accolade.

The 2017 Gold Medal of the Society recognizes her work in clinical biophotonics, photodynamic therapy and cancer diagnosis with optical techniques.

Svanberg, who served as SPIE’s president in 2011 and is married to much-lauded spectroscopy researcher Sune, has in particular been instrumental in developing “optical biopsy” technologies based on laser-induced fluorescence.

“Her deep commitment to the practical application of optics and photonics for the diagnosis and treatment of disease has helped save and improve the lives of hundreds of individuals. Furthermore, her activities in the developing world have changed countless other lives by bringing hope.”

The Svanbergs are a long-standing and well-known fixture at optics and photonics events, with Katarina instrumental in founding the highly regarded Ven Summer School and also helping set up medical laser technology centers in Africa and training personnel in some of the poorest regions of the continent.

SPIE’s 2017 president-elect Maryellen Giger said: “Dr. Svanberg has tirelessly worked to transfer her knowledge and the application of biomedical optic techniques to developing areas. The transfer of knowledge has occurred through academic and university functions as well as through various optical companies.”

Full list of awards
The Gold Medal of the Society is the highest honor that SPIE, which publishes optics.org, awards. Since 1977 it has been awarded annually in recognition of outstanding engineering or scientific accomplishments in optics, electro-optics, or photographic technologies or applications, to recipients who have made exceptional contributions to the advancement of relevant technology.

As well as the Gold Medal, SPIE announced the recipients of 11 other awards. These are the winners: