The envisaged constellation will comprise up to 108 satellites in a low-Earth orbit, each with a high-power microwave downlink to ground stations on Earth. However, the satellites will be linked to each other optically, in order to deliver ultra-high speeds, security, and low latency.

The agreement comes just a couple of months after Thales Alenia Space said that it would acquire the optoelectronics business currently belonging to the Swiss engineering firm RUAG – giving it an in-house technology for the constellation’s optical inter-satellite link technology, said to be critical to overall system performance.

“RUAG brings to the table more than 20 years of experience in the engineering and production of optical communications terminals for spacecraft,” said Thales. “RUAG’s technical expertise in this specific area will help assure the LeoSat constellation will have the best and most vetted solution for their inter-satellite links. The final configuration and design will be completed during the upcoming phase B.”

‘Faster than fiber’
LeoSat Enterprises, established in 2013 by ex-Schlumberger executives Cliff Anders and Phil Marlar, wants to launch between 78 and 108 low-Earth orbit satellites to create what it describes as an enterprise-grade, high-speed and secure data network.

“The high-throughput satellites (HTS) will be interconnected through laser links, effectively creating an optical backbone in space which is about 1.5 times faster than terrestrial fiber backbones,” claims the Washington, DC, company.

Earlier this month LeoSat said it had signed up its first customer, said to be “a globally operating financial trading company”, that wants to exploit the low latency of the satellite network to perform secure trading at a faster speed than its rivals using more conventional terrestrial links. 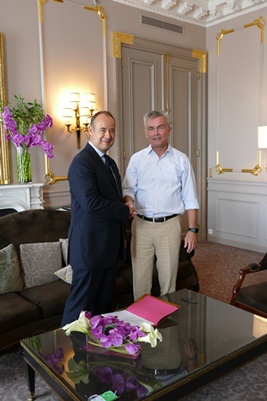 Signed and sealed: Thales and LeoSat shake on it

Thales Alenia Space has already conducted an initial feasibility study, with a preliminary definition of the system and its compatibility with other services using the microwave Ka band terrestrial link.

The “phase B” element will move on to define the overall satellite system architecture and performance specifications, for both the terrestrial and space elements.

“It will also provide the framework needed to set up an optimized organization for production and deployment,” say the two firms.

LeoSat CEO Mark Rigolle added: “We have already signed our first customer contract, which is a very strong endorsement of our unique solution offering the highest performance of any existing or planned system, including fiber.”

Optoelectronics opportunities
Thales Alenia Space, which is co-owned by France-based Thales (67%) and Italy’s Leonardo-Finmeccanica (33%), should complete its acquisition of RUAG’s optoelectronics unit by the end of the year.

The Zurich-based division specializes in scientific instruments for satellites and optical communications equipment used in space. Currently, it employs 75 people and boasted sales of CHF 18 million in 2015.

Thales CEO Patrice Caine said when the acquisition was announced: “The unique expertise of RUAG's optoelectronic business unit strengthens Thales Alenia Space's product portfolio in the Earth observation segment, and it will also open new opportunities in telecommunications and science."