Canadian developer of solid state lidar systems has several new systems “in the works” for trials in 2017-18. 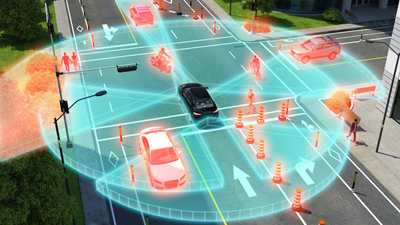 LeddarCore ICs will enable the design of affordable LiDARs for autonomous driving.

During last week’s Sensors EXPO 2016, held in San Jose, Ca, US, LeddarTech confirmed that two LeddarCore IC programs are in the works: the LC-A2, targeting the automation layers 1 to 3, with the first samples scheduled for release in the second half of 2017; and the LC-A3, which will meet the specifications for automation layers 2 to 4, with expected sample availability in 2018.

The next-generation LeddarCore ICs enables ADAS and autonomous functions, in which LiDAR replaces or complements camera or radar technologies; high-density 3D point cloud LiDAR for higher levels of autonomous driving; and support for both flash and beam-steering LiDAR systems.

With a range up to 250m, a field of view of 140°, and up to 480,000 points analysed per second, with a resolution of 0.25° in both horizontal and vertical dimension, the LeddarCore ICs will enable the design of affordable LiDARs for all levels of autonomous driving, including the capability to map the environment over 360° around the vehicle, said the developer.

The company is currently in the process of selecting a partner for the design, manufacture and joint commercialization effort of the new LeddarCore ICs “on a massive scale”. With the unveiling of this roadmap, LeddarTech said it is officially adding its name to the select list of technology innovators racing to supply car makers with LiDAR solutions that meet stringent automotive requirements.

Charles Boulanger, LeddarTech's CEO, commented, “With such advanced ICs integrating the most efficient optical detection and ranging capabilities, automotive component manufacturers and system integrators will be equipped to deliver high-performance solid-state LiDAR sensors and enable the deployment of advanced automation capabilities to the mass markets."

This technology roadmap reiterates LeddarTech's philosophy of collaborative development, according to Boulanger. "Rather than commercializing a one-size-fits-all LiDAR as a finished product, LeddarTech provides LiDAR core technology packaged into chipsets. We put our expertise in LiDAR at the service of our clients, enabling them to develop optimized LiDAR designs to drive proprietary, differentiated ADAS/AD solutions," he added.

Founded in 2007 as a spin-off of INO, Quebec City, Canada's leading optics and photonics research institute, LeddarTech is a supplier of advanced detection and ranging systems based on patented, leading-edge sensing technology that performs time-of-flight measurement using pulses from infrared light processed through innovative algorithms, detecting a wide range of objects in various environmental conditions.