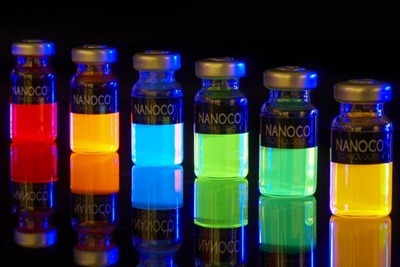 Nanoco, the Manchester, UK, company that specializes in cadmium-free quantum dots (CFQDs) for display and lighting applications, has signed a long-term deal with a major Asian provider of optical films for displays.

Taiwan’s Wah Hong Industrial Corporation is the first to agree a non-exclusive deal with Nanoco since the latter switched to a non-exclusive commercialization strategy earlier this year.

While the specifics of the agreement have not been disclosed, the seven-year deal is known to involve an up-front payment for Nanoco’s red and green emitters, as well as a fee for delivering CFQD resin made at the firm’s facility in Runcorn, and further royalty payments on Wah Hong’s sales of processed resin.

Cadmium hazards
Wah Hong is said to be one of the world’s largest manufacturers of optical films and sheets used in displays, and company president C. P. Yeh said in a Nanoco release:

“We are very excited about signing this agreement with Nanoco because it gives us the opportunity to provide our customers with Nanoco’s cadmium-free quantum dot product, which is the most advanced material for next-generation LCD displays.

“Display makers in East Asia are increasingly aware of the hazards of cadmium and we believe that this cadmium-free product will be an important driver of growth to complement our existing product range.”

Nanoco CEO Michael Edelman added: “This agreement marks our first since the company adopted a non-exclusive strategy in display with the objective of bringing our products to market quickly. We look forward to working alongside Wah Hong to drive the commercialization of our technology.”

The UK firm said earlier this month - in response to a sharp rise in its London-listed stock price - that it was in active negotiations with “a number of parties” about possible commercialization agreements.

The Wah Hong announcement appeared to prompt another uptick, and in the four weeks since the end of June Nanoco’s stock price has risen by around 75 per cent.

Back in March, Nanoco revealed that it had changed the terms of its agreement with long-term development partner Dow Chemical from exclusive to non-exclusive. While that means lower royalty payments from Dow, and no possibility of future earn-out income, the CFQD maker reckoned the switch would allow it to “maximize the roll-out” of its technology.

CEO Edelman said at the time: “We believe this is a very significant development for Nanoco as we are gaining greater control over the commercialization of our technology in display against a very positive market backdrop.”

Cadmium confusion
While QD-enhanced LCD televisions are rapidly gaining traction – analysts at DisplaySearch recently forecast that nearly 19 million such displays would ship in 2018 – the relative benefits of the specific type of QD remains a bone of contention among suppliers.

Nanoco and other CFQD developers claim that their technology is more environmentally friendly than, and performs just as effectively as, the older cadmium selenide (CdSe) QDs that have featured in most display applications thus far.

However, makers of CdSe-based QDs maintain that CFQDs are inferior in terms of display performance and efficiency – meaning that, counter-intuitively, CFQD-based displays consume more energy and contribute to more cadmium being released into the atmosphere via greater consumption of fossil fuels in coal-fired power stations than the tiny amount used in QD production.

The confusion has not been helped by a recent report from consultants at the Öko Institute for Applied Ecology that made different recommendations on the application of cadmium-based and cadmium-free QDs in the displays and lighting markets.

That report was instigated after the European Parliament overwhelmingly rejected a European Commission decision to extend an exemption on the use of cadmium-based QDs in displays, despite a general ban on cadmium in manufacturing because of its high toxicity.

Nanoco is also working on CFQD applications in lighting – where it has collaborated with Osram – as well as in solar energy and life sciences.

But Edelman said at the time that the new non-exclusive licensing strategy gave Nanoco greater control over the commercialization process, opening up new sectors within the displays market – such as high-end PC monitors.