Window to the brain moves closer to reality 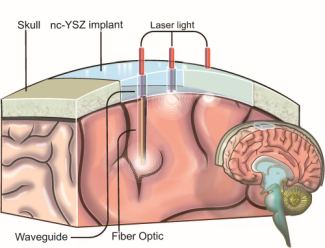 A significant hurdle facing laser-based treatments in brain surgery and related therapies is ensuring that the laser light penetrates deep enough into the brain to reach its intended target tissues, and does so in as minimally invasive a way as possible.

One possible solution is under development by a team from Bourns College of Engineering at the University of California, Riverside, and Mexico's CICESE, involving the use of a transparent skull implant in combination with suitable embedded waveguides or optical fibers as a way to provide light with a less inhibited route into the tissues - in effect a window to the brain.

Last year the project was awarded funding to support further development of an implant made from the most promising candidate material, nanocrystalline yttria-stabilized zirconia (YSZ), the same ceramic already used in some dental and orthopedic procedures - although in those cases the manufacturing process leaves the material opaque.

Speaking to Optics.org at the time, Guillermo Aguilar of UC Riverside indicated that nothing similar to this kind of transparent implant with optical properties tailored specifically to facilitate laser surgery has been developed before.

"What makes our material unique is a process that allows us to start from a fine powder and render it transparent by maintaining the nanostructure of the native material, tightly controlling the pressure and temperature variation rates during a densification operation," he commented.

Essential biompatibility
A pair of recent studies have now helped to confirm the potential clinical feasibility of the window, by testing both the biocompatibility of the implant and its ability to endure bacterial infections - two obvious requirements.

The first, published in Lasers in Surgery and Medicine, investigated the potential interaction between an implant in use and E. coli bacteria, commonly connected with cases of meningitis after cranial surgery or trauma.

Bacterial adhesion to a cranial implant and the formation of a biofilm on the surface is thought to be the leading factor in subsequent infection and treatment failure, so the team studied how the role of the implant as a conduit for laser light might influence that key step. Results suggested that near-IR laser light reduced the viability of E. coli biofilm formation on the implant, with both laser power and mode of operation having an influence.

Continuous wave operation had a stronger anti-bacterial effect than a pulsed laser, although temperature build-up in the implant is then an unwanted side-effect. However, a pulsed source with the right parameters could generate a more controlled photothermal effect, and inhibit bacteria growth by that method without damaging underlying tissues.

"This was an important finding because it showed that the combination of our transparent implant and laser-based therapies enables us to treat not only brain disorders, but also to tackle bacterial infections that are common after cranial implants," commented Devin Binder of UCR's School of Medicine. "These infections are especially challenging to treat."

A second study in Nanomedicine: Nanotechnology, Biology and Medicine looked in detail at the in vivo biocompatibility of YSZ, by examining the inflammatory response to implantation in an animal model.

The YSZ implant was compared with polymers PEEK and PEKK, both sometimes used in conventional human craniotomies, by measuring parameters such as blood vessel diameter, blood flow and vascular permeability around the implant. Over a two-week period, the team found a lack of inflammatory reaction at the microscopic level for YSZ according to the study - a more favorable outcome than was seen for the conventional plastics.

“The YSZ was actually found to be more biocompatible than currently available materials, such as titanium or thermoplastic polymers, so this was another piece of good news in our development of transparent YSZ as the material of choice for cranial implants,” Aguilar said.