European Commission signs up with China on remote sensing 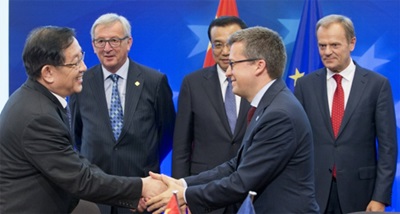 Officials representing the European Union and China have signed a new “collaborative research arrangement” in the area of remote sensing.

The deal, which emerged during the Europe-China summit that is taking place this week in Brussels, involves Europe’s Joint Research Centre (JRC) and the Chinese Academy of Sciences’ Institute of Remote Sensing.

It is intended to build upon a co-operation that began shortly after the devastating Sichuan earthquake in 2008, and which has generated ideas such as “Digital Earth” – a concept combining global communications networks with Earth observation technologies and described as “a global initiative to construct a comprehensive virtual representation of the planet”.

The two parties already organize the International Symposium of Digital Earth, for example, with the next edition in the series scheduled to take place in Halifax, Canada, in October 2015.

JRC announced: “Under this new agreement, the co-operation will be reinforced and extended to promising areas, such as air quality, human settlement detection and characterisation, land and soil mapping, land cover mapping, digital earth sciences and agricultural monitoring.”

Collaborative activities under the new arrangement are set to include the exchange of scientific and technological information, and joint training programs, with optics and photonics technologies on board satellites and other sensor systems likely to play a key role.

Optical satellite imagery
One example of the collaboration is what is known as “Global Human Settlement Layer” (GHSL) technology, used to analyze human settlements through remote sensing imagery captured by Chinese satellites.

China’s CBERS-2B satellite, developed in collaboration with Brazil and launched in 2007, carries a range of optical instruments including a wide-field imager with a ground swath of 890 kilometers, providing a synoptic view with a spatial resolution of 260 meters.

It also carries high-resolution CCD sensors operating in five spectral bands extending from 450 nm in the blue through to 890 nm in the near-infrared, with a swath width of 113 kiometers and a spatial resolution of just 20 meters.

Also on board CBERS-2B is an infrared multispectral scanner working across three short-wave infrared (SWIR) bands and a thermal region from 10.4-12.5 µm.

According to JRC, the satellite’s sensors have been used to map the whole of China, supporting the Digital Earth vision.

IP rights; scientific exchanges
The remote sensing collaborative agreement was just one element of the 17th bilateral summit between the European Union and China, which has been taking place in Brussels this week amid the backdrop of the ongoing financial crisis in Greece.

Also marking the 40th anniversary of diplomatic relations between the EU and China, the summit saw a new memorandum of understanding signed on the protection and enforcement of intellectual property rights.

In addition Carlos Moedas, the European Commissioner for Research, Science and Innovation, launched a new initiative with his counterpart Wan Gang, the Chinese Minister for Science and Technology, which will see young scientists from China join projects funded by the European Research Council. The first exchanges under that agreement are anticipated later this year.

Moedas said: "China has become a major science and technology power. Europe needs to engage with China in the context of our open science, open innovation and open to the world policy. Today's agreements mark a step towards addressing global societal challenges and developing joint innovative solutions together.”

On top of the remote sensing agreement those measures include setting up a new co-funding mechanism, using cash earmarked for the Horizon2020 program, to support joint research and innovation projects involving China.

According to figures released by the European Commission, China’s spending on research and development activity has now reached 2 per cent of GDP, with the country setting a target of 2.5 per cent by 2020.

The country is already ranked first in terms of the number of people working in research, with some 2.5 million, while the number of graduates in science and technology subjects has grown to more than 1.4 million per year.