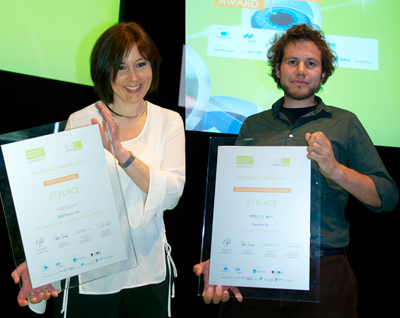 At Startup World – part of the LASER World of PHOTONICS expo in Munich – the winners of the first competion were announced this morning in the two categories of photonics technology and 3D printing.

The first prizes of the new awards, judged by a panel of industry experts in recent months and presented here today by various representatives of industry and Messe München, include a €5000 grant, a free booth at this year’s Startup World and a business development package from Messe München and AZO, a Bavarian hub of the aerospace industry.

Nanolive is a start-up based at the EPFL Innovation Park, Lausanne. Founded in 2013, the company has developed what it calls “a revolutionary microscope” – the 3D Cell Explorer, which enables investigation of living cells in 3D without damaging them. Cotte commented, “For the first time, scientists can now observe the inner workings of cells, including their nuclei and organelles.”

The second and third place in the category 3D Printing Award went to the Swisslitho AG for NanoFrazor and the Polish company Sandmade for the LS One Printer; and in the category Photonics Technology Award to the Danish Norlase ApS for the AuroraOne laser and the US company 8Tree LLC for dentCHECK.