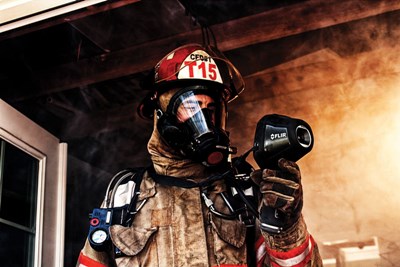 New and cheaper infrared components are behind the launch of a low-cost thermal imaging camera that is expected to result in more widespread use of the technology in firefighting.

FLIR Systems says that its “K2” camera, which can be used to see through smoke and identify hot-spots, will sell at a “breakthrough” price of $1295. The camera, which will be available from September, is based around the US-listed firm’s low-cost “Lepton” imaging core and will deliver 160x120 pixel images.

Meanwhile the optical component maker LightPath Technologies revealed that its wide field-of-view optical lens assembly, based on low-cost infrared molded optics, has been selected for the same application.

Like FLIR, LightPath believes that the development could lead to a much wider uptake of thermal imaging equipment among the world’s estimated 5 million firefighters.

Its CEO Jim Gaynor said in a company release: “We believe the availability of cutting-edge infrared lenses and optical technologies to original equipment manufacturers, including some of the leading defense suppliers in the world, will drive increased adoption of this type of camera.

“This is a very large and vital market where increased levels of government spending are being allocated to ensure the safety of both the firefighters and the people they protect.”

Uncooled microbolometer sensor
FLIR boss Andy Teich said of the company’s latest release: “The K2 is another example of how our Lepton thermal camera core can address new customer segments for thermal imaging.”

It is equipped with FLIR’s proprietary “multispectral dynamic imaging” technology, which the firm claims to enhance image quality significantly, meaning that firefighters are able to see key structural details in tough environments.

According to FLIR, that works by “etching” details from a built-in visible light camera onto the thermal image.

The K2 camera’s key component is an uncooled microbolometer that senses in the 7.5-13 µm thermal range of wavelengths, at a frequency rate of 9 Hz.

With global spending on defense generally in decline, a key part of FLIR’s current business strategy is to expand the reach of infrared imaging technology to the consumer and commercial sectors – the most obvious example of which is the firm’s development of the “FLIR ONE” thermal imaging platform for smart phones, which also utilizes the Lepton core technology. 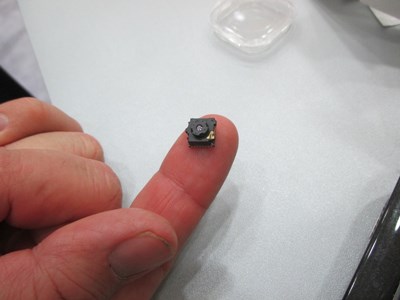 LightPath cited its partnership with an unspecified thermal imaging camera maker in Europe, which has ordered some 16,000 molded infrared aspheric lenses to be delivered over the course of nine months, as one example of that trend.

“LightPath has since been awarded a single source position at a rate of 2,000 lenses per month,” announced the company, which reported a rare quarterly net profit last month as it began to reap the benefits of the molded optics technology development.

With the price of thermal cameras said to have decreased at a rate of 12-15 per cent per annum for the past five years, and that rate of decline expected to continue in the near future, both LightPath and FLIR are hopeful of benefiting from a sharp increase in adoption of the technology as it becomes more affordable.