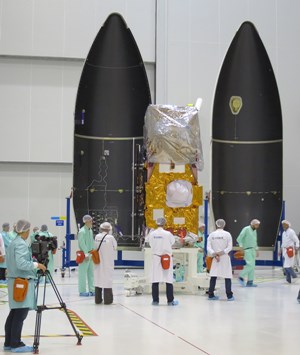 The first in a new fleet of European satellites kitted out with state-of-the-art imaging equipment is set for launch from French Guyana on June 22, announced the European Space Agency (ESA).

The latest “Sentinel-2” constellation will use multispectral imaging aboard two satellites to deliver unprecedented detail of land and coastal areas, for agricultural, environmental, security and humanitarian applications.

Sentinel 2A will launch first, and should be joined by Sentinel 2B next year. The mission’s high-resolution multispectral camera covers 13 different spectral bands, and should provide an entirely new perspective of Earth’s land and vegetation.

The “color” vision provided by the multispectral kit will also complement the existing Sentinel-1A satellite, which was launched last year and has already recorded some 680 terabytes worth of data using radar.

High-speed laser transfer
Crucially, in terms of transmitting that data, the satellites are equipped with laser links as part of the European Data Relay System (EDRS), meaning that the data-intensive radar and optical imagery can be sent and shared quickly.

The various Sentinel satellites are all part of the wider “Copernicus” project, described by ESA as the most ambitious Earth observation program to date.

The multispectral sensors on board Sentinel-2A and Sentinel-2B cover 13 wavelength bands from 423 nm in the blue spectrum all the way to 2.2 µm in the infrared.

The 290-kilo push-broom imager has been built by Astrium SAS in France, and its optical features include a three-mirror anastigmat telescope optimized to give a swath width of 290 km, much larger than earlier multispectral missions.

CMOS image sensors are in place for the visible and near-infrared portions of the spectrum, along with mercury cadmium telluride for the longer infrared wavelengths.

Coupled with the high-speed laser links, the Copernicus network should be capable of delivering high-resolution satellite images at close to real time, something that would prove invaluable for security and humanitarian relief missions in particular.

Future Sentinels feature UV
The vast number of images being produced by the mission, combined with their rich wavelength detail, is also expected to create business opportunities for companies who can access and analyse the data. The European Commission reckons that this could create as many as 50,000 jobs, directly and indirectly, over the next 15 years.

In the pipeline for future launch are a whole series of additions to the Copernicus network. Sentinel-3 will comprise two polar-orbiting satellites providing medium-resolution optical imagery and 21-band spectrometry, while the geostationary Sentinel-4 will add ultraviolet imaging capability using sensors from UK firm e2v technologies.

Sentinel-5 will feature ultraviolet, visible and infrared spectrometry across seven wavelength bands to monitor atmospheric gas and aerosol concentrations, while Sentinel-6 – initially earmarked for launch in around five years – will complete the network with additional radar capability designed for oceanography and climate studies.