Frost and Sullivan report suggests market will reach only $563 million in 2019. 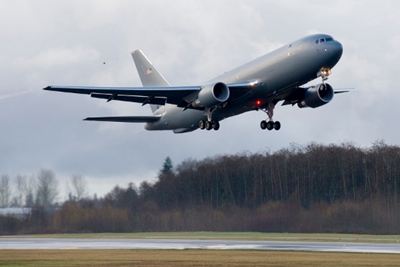 The global market for airborne infrared countermeasures will grow at an average rate of less than 3 per cent over the coming five years – despite the ongoing replacement of flares with far more advanced laser-based systems.

That prediction comes in a new report from the consultancy firm Frost & Sullivan. Its aerospace and defense analyst John Hernandez says that while spending by the US Air Force to upgrade its planes will keep demand steady, overall the market will grow from just over $500 million in 2014 to around $560 million in 2019.

"Steady opportunities will emerge for market participants as the US Air Force plans to acquire 179 KC-46A tankers between 2015 and 2028,” Hernandez reports, adding that various other countries, including India, are showing interest in laser countermeasure systems because in the long run they are more cost-effective than flares – which need to be replaced after use.

But defense budgets remain tight in general, and this has already delayed IRCM equipment purchases in some countries. A funding shortfall in India has led to fewer purchases of Apache and Chinook helicopters than expected, and has reduced considerably its demand for laser IRCMs.

“Most third-world countries are going to adopt airborne IRCM systems several years down the road,” Hernandez reckons. “They are still building defense structures, which require time and development through proper priority purchases.”

He points out that by far the most research and development spending related to airborne IRCM is taking place in the US, which has the largest air force and helicopter fleets. Other countries have been capitalizing on those efforts in the US, by procuring IRCM systems that have been field-tested.

ITAR discussions open
The Frost & Sullivan report comes two months after BAE Systems revealed that its version of laser IRCM had been approved for export by the US Department of Defense. At the time, the multi-national arms firm said that it had seen “tremendous international interest” in the system, which was launched back in 2009.

It also coincides with a key period during which the US Department of Commerce is opening up discussions about International Traffic in Arms Regulations (ITAR) restrictions that impact the export of various optical components. optics.org publisher SPIE is hosting a webinar on that very topic on May 12.

But as the Frost & Sullivan report points out, the market for IRCMs is primarily driven by conflict – of which there is plenty at present. “As skirmishes continue to pop up around the world, military leaders will seek advanced technology in order to gain an edge over their adversaries,” notes the analyst team, adding that the development of more sophisticated missiles demands more advanced countermeasures.

They add that automation is the key element to the effectiveness of the systems, because this reduces the workload on military personnel.

Another factor identified as an issue is the relative lack of competitors providing IRCMs. They are largely restricted to a handful of the major US-based defense contractors, which ultimately drives up their cost.

Among the recommendations in the report is a call for extra investment in IRCMs for medium- and heavy-lift helicopters, where there is seen to be a more compelling case to install the technology.