Taiwan chip makers set to lead a smaller increase in capacity expenditure than previously expected, although Sony is boosting its image sensor output. 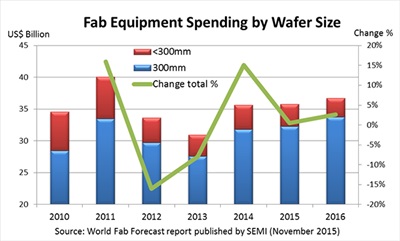 Spending on semiconductor manufacturing equipment, a key market sector for the photonics industry and laser vendors in particular, is set to rise 2.6 per cent next year to reach $36.7 billion.

That’s according to the latest forecast from the global Semiconductor Equipment and Materials International (SEMI) trade association.

In the November 2015 issue of its quarterly World Fab Forecast report, SEMI says that capacity expenditure by chip makers rose only 0.5 per cent in 2015, to reach $35.8 billion.

That small increase was led by Korean companies, who spent $9 billion on front-end equipment such as lithography kit. Next year will see Taiwanese firms take the lead, as the spending focus shifts away from dynamic RAM (DRAM) devices and towards Flash memory.

"2016 will be dominated by Flash, mainly 3D-related architectures," reckon SEMI’s analysts. "Capacity for 3D-NAND will continue to surge." SEMI’s report tracks ten major 3D-producing facilities, with a capacity expansion of 47 per cent in 2015 and 86 per cent in 2016.

Muted growth
If correct, that 2016 spending level will mark four years of continuous but somewhat muted growth since the last major downturn, which saw annual capex shrink from $40 billion in 2011 to just over $30 billion in 2013.

SEMI adds that the foundry segment will rank second in terms of fab equipment spending in 2016, continuing a period of steady growth. Logic spending has been particularly strong in 2015, with SEMI reporting a 90 per cent surge – driven largely by Sony’s investment in production capacity for new image sensors.

Last month, SEMI analysts reported that although equipment bookings had slowed in recent months, the year-to-date figures for both bookings and billings remained ahead of 2014 figures. Preliminary statistics for October 2015 showed bookings of $1.33 billion by North American equipment firms, down from a monthly peak of $1.67 billion in August this year but up from only $1.1 billion a year ago.

But the recent slowdown does mean that earlier predictions of more rapid growth have turned out to be incorrect. In SEMI’s previous quarterly report, published in August, the trade association had forecast spending growth of 5 per cent this year and 6.6 per cent in 2016.

It adds that there are currently 25 semiconductor fabrication facilities set to begin construction in the closing quarter of 2015 or later.

Sony grows image sensor production
In February this year, Sony said that it was to invest close to a billion dollars to increase CMOS image sensor capacity by around one-third, to 80,000 wafers per month by mid-2016. That represented a higher target for the firm than previously communicated, prompted by fast-growing demand for the devices in smart phones.

Sony is reckoned to control around a 40 per cent share of the image sensor market, with US-listed Omnivision Technologies – soon to be acquired by a Chinese private equity group – ranking second with an approximate 15 per cent share.

But in a year that has seen significant developments among the leading manufacturers, Sony said in October that it would spin-off its image sensor operation – part of a wider corporate strategy to give its key divisions greater autonomy.

The Tokyo-based consultancy firm Techno Systems Research reckons that the market for image sensors was worth around $8.7 billion in 2014.