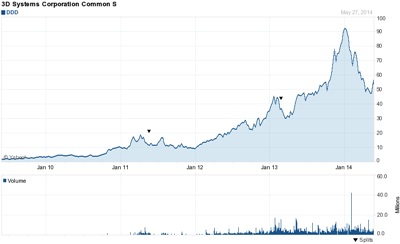 3D Systems, the US company at the forefront of the fast-growing 3D printing and additive manufacturing sector, is to raise additional cash through a secondary public offering on the US stock market.

Filings with the US Securities & Exchange Commission (SEC) dated May 27 indicate that the South Carolina firm will offer nearly 6 million shares of common stock, equivalent to a dilution of around 6 per cent for existing shareholders.

Accordingly, 3D Systems’ stock dropped by 5.4 per cent on news of the filing, continuing a decline that has seen the company’s value fall by more than 40 per cent since the start of 2014.

Even so, at the stock’s current level of approximately $54 the move would generate proceeds in the region of $325 million. Canada-based bank Canaccord Genuity is underwriting the secondary offering.

3D Systems, which makes a range of additive manufacturing equipment based on both laser- and non-laser techniques, says that it could use the additional cash for further acquisitions – the company recently bought the French laser sintering specialist Phenix Systems and rapid prototyping firm CRDM in the UK.

Pioneering founder
While much of the recent hype surrounding the 3D printing sector has revolved around consumer applications of the technology, 3D Systems is also regarded as a pioneer in higher-end production technologies like stereolithography and selective laser sintering.

The European Patent Office recently nominated the company’s founder Chuck Hull for its 2014 European Inventor Award, in recognition of his invention of the stereolithography technique, which is now used to produce anything from personalized hearing aids to automotive parts. According to 3D Systems, Hull himself printed the first ever object made with additive technology – a small cup – back in 1983. 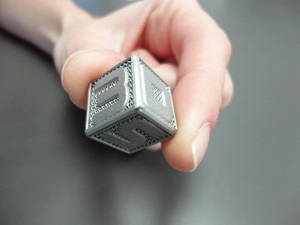 Earlier this month, the company said that it had now shipped more than a hundred “fab grade” systems for applications in aerospace engineering – one area of growth for laser additive manufacturing that was highlighted during the recent AKL’14 laser technologies conference.

According to its most recent financial results, despite a market capitalization now in the region of $6 billion, 3D Systems had a relatively small cash balance of $300 million on its balance sheet.

The secondary offering should more than double that figure, while also giving it the option of paying off some long-term debts in the form of convertible notes accruing interest at an annual rate of 5.5 per cent.