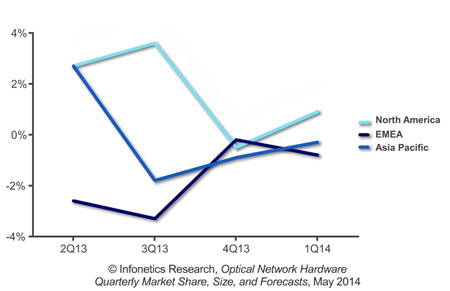 Investment in 100G optical communications systems worldwide during 2013 was “breathtaking”, according to a new market report published today by Infonetics Research. Andrew Schmitt, principal analyst for optical at the company commented, “Total port shipments tripled during the year, which equates to around $2 billion in spending just related to 100G systems. That’s a lot — roughly 20% of all WDM spending.”

But the bonanza is not being shared across a wide range of suppliers, as Schmitt explained: “This revenue is flowing primarily into the hands of five companies: Alcatel-Lucent, Ciena, Cisco, Huawei, and Infinera.”

Although sales of 100G optical WDM have taken off, some older technologies have been on the slide. The overall global optical spend in 2013 was down yet again as demand for legacy SONET/SDH systems continued to fall: optical network hardware revenue, including WDM and SONET/SDH, declined 2% year-over-year in 1Q14. And on a rolling four-quarter basis over the past year, total optical spending was roughly flat, Infonetics concluded.

Other notable findings in the report include: The WDM segment notched its seventh straight quarter of year-over-year growth, up 8%; EMEA experienced a seasonal 4Q to 1Q drop as we entered 2014, but this effect is no longer evident in the USA, a result of large carriers changing spending patterns and smaller carriers operating on a more project-oriented, rather than calendar-oriented, purchasing cycle.

Ciena up, Huawei down

Looking at the performance of some of the bigger players, the analyst observed that, on a year-over-year basis for 1Q14, Huawei’s revenue market share slipped, Ciena’s soared 26%, while Alcatel-Lucent’s lifted 8%. 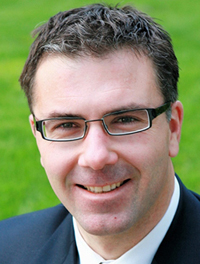 Infonetics has also in the past few months published two other reports on different but related markets:

On May 6 2014 the analyst released excerpts from its latest ROADM Components report, which tracks the reconfigurable optical add/drop multiplexer (ROADM) optical network equipment market and the wavelength selective switch (WSS) components within it.

Schmitt commented, “The rollout of colorless, directionless, and contentionless ROADMs is starting this year with major suppliers such as Ciena moving to production and carriers including Verizon proceeding with deployments. This should provide a much-needed tailwind to the WSS component sector.”

Globally, ROADM WSS component revenue totaled $111m in the second half of 2013, up 4% from the first half, but down 7% from the same period a year ago. For the full year 2013, worldwide revenue for ROADM WSS components declined 8% from 2012 due to mild increases in volume combined with continued price declines. In 2014, Infonetics expects both WSS component unit shipments and revenue to increase.

In April, the company published excerpts from its 1G/10G/40G/100G Networking Ports study. Analyst Matthias Machowinski noted, “Deployments of 1G through 100G ports grew significantly in 2013, as enterprises and service providers invested in their networks to accommodate the growth in traffic, and revenue growth accelerated as buyers shifted to higher bandwidth — and more expensive — ports. Coherent 100G is well on its way to completely taking over the core, growing to nearly 80% of all wavelengths by 2016, effectively shutting down competing 10G and 40G deployments.”