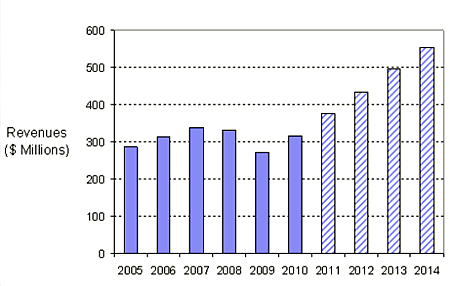 On the up: Strategies Unlimited's forecast for all types of mid-IR lasers under 1kW.

The mid-IR laser segment, defined as the spectrum that lies between the near-IR and far-IR segments - from about 1.8µm to about 15µm - now accounts for more than $1 billion of laser revenue per year. This segment, not including CO2 lasers used for material processing, covers a wide-range of mid-IR laser applications ranging from military to sensing to medical, which feature revenue growth at almost 20% per year.

Although the mid-IR laser segment is a smaller market overall, it has many interesting technology applications, the analyst comments. Many mid-IR lasers, imagers and sensors require cryogenic cooling to operate, which greatly increases their cost, weight, and size. In addition, producing fiber cable that can transport light at wavelengths longer than 2µm is expensive, so fiber-delivery of mid-IR lasers remains rare. This fact has hurt the market for materials processing using CO2 lasers because close competitor, the fiber laser, delivers its energy via a fiber. 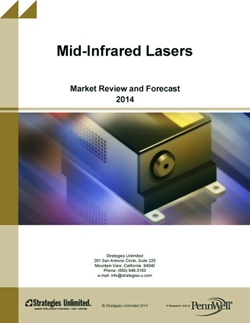 Performance, quality improvements
Strategies Unlimited's report says that in the past five years, mid-IR lasers, mid-IR-capable fiber, and mid-IR sensors and imagers have all greatly improved: "Most of these devices now operate at room temperature, their size and weight have been greatly reduced, and their price has gone down. This has opened up a range of applications that were not possible just a few years ago."

One example of this is mid-IR quantum cascade laser systems. QCLs have achieved a price and performance level that is increasingly attractive for applications ranging from military IRCM systems to spectroscopy, including a wide range of medical, scientific, research, security, and pollution monitoring applications.

The $4,250 report explores the market for mid-IR lasers and mid-IR applications in materials processing, medical, sensing, infrared counter measures, illuminators, and R&D. Each section includes laser units and revenue forecasts for 2012 to 2017, with some sections also including a breakdown by mid-IR laser types. It also contains a listing of mid-IR laser, sensor, and imaging suppliers.