Stock down 40 per cent after weak results and contract manufacturing issues. 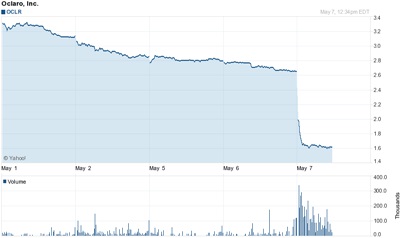 Despite strong demand for its 100G optical communications products, the component, module and subsystem maker Oclaro was hit hard by the stock market after a weak set of results for the quarter ending March 29.

Oclaro, which last year rid itself of two loss-making units thanks to deals with II-VI, remains firmly in the red as restructuring continues. It posted a net loss of $22.9 million on total quarterly revenues of $95.1 million.

And although that represented an improvement on the loss of $40 million recorded by the same company a year ago, a ruthless market wiped off nearly half of the value of the stock in trading shortly after an update from CEO Nick Dougherty.

“While the March quarter results did not meet our expectations, we continued to make good progress on our turnaround plan,” he told investors, although gross margins of just 12 per cent were way below the company’s outlook.

Dougherty, who became CEO last June following the departure of Alain Couder, said that the reasons for that were a combination of product rationalization and the timing of certain production ramps, as well as “issues related to management of our contract manufacturers”.

Workforce down but now hiring
Expanding on the difficulties in a conference call with investors, he said: “Historically, Oclaro has not done a very good job of integrating its numerous acquisitions or making hard decisions on product line.”

One restructuring move that Oclaro made in the latest quarter was to integrate into Japan all of its client-side pluggable optics products, which were previously designed and supported in San Jose, California.

“The move provides stronger management and focus for these products,” reasoned Dougherty. “This restructuring resulted in excess and obsolete inventory impacting our gross margin.”

On top of that, Oclaro has been slashing its workforce. When Dougherty became CEO, the company employed around 3000 people. That was cut to 2000 by the start of 2014, and following the sale of two manufacturing units that saw 500 people transfer to II-VI, Oclaro’s headcount has since been cut to just 1400 - although the company is actively hiring as it increasingly positions itself in the 100G space, with several jobs available at its Caswell, UK, wafer fabrication facility.

The latest quarter also saw the company’s wavelength selective switch (WSS) business in Korea sold for $1.4 million, bringing the company down to eleven sites overall – Dougherty has a target of ten that he says will be met by July 1.

In addition to eliminating complete sites, Oclaro has also reduced the floor space used at its Shenzhen, China, facility, following the of transfer one-and-a-half floors there to II-VI through the deal to transfer pump laser production.

Caswell investment
It isn't all cuts, however. Additional investment has been focused on the indium phosphide (InP) production facility at Caswell, where a new pilot production line should allow Oclaro to ramp complex new products such as InP-based tunable laser assemblies much more quickly.

“We are sampling the new tunable SFP+ modules today and plan to do volume production starting in the third quarter of this calendar year,” Dougherty said, while the company's first CPF2 prototype module for 100G coherent transmission is set to ship later this month.

“Major carriers are planning to use 100G coherent in metro networks, providing us with significant long-term additional growth opportunities. This further emphasizes that our research and development investment and priorities have positioned Oclaro to be a leader in this large and fast-growing market.”

Further beefing up the focus on tunable lasers, Oclaro has recently hired Richard Craig, formerly the CEO of tunable laser specialist Santur, as the new president of its integrated photonics division.

Emphasizing a focus on careful step-by-step restructuring of a company that has struggled to make any profit during a turbulent past decade, Dougherty said that revenues will remain flat in the current quarter, and reiterated a plan that he believes will see Oclaro break even on quarterly revenues of $110 million by the end of this year.

But that appeared to do little to calm market jitters over the company’s performance. In early trading following the announcement, Oclaro’s stock had slumped by nearly 40 per cent to around $1.60 on the Nasdaq exchange.

At that level, the company’s market capitalization of $170 million is equivalent to less than two quarters of sales.