As a simple, non-invasive health indicator, the use of photonic and other technologies to study saliva is gaining popularity. 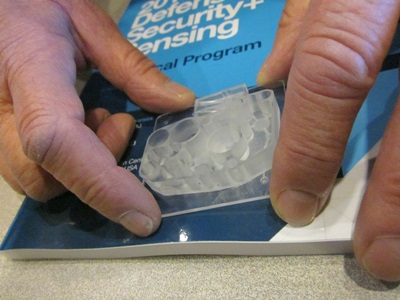 by Ford Burkhart in Baltimore
Several speakers described new approaches to saliva-based diagnosis of cancer and other serious diseases during a Defense, Security and Sensing (DSS 2013) technical session on Sensing Technologies for Global Health, Military Medicine and Environmental Monitoring.

Daniel Malamud, of New York University, presented a microfluidic card for field analysis of blood - or in fact any fluid. He developed the card in collaboration with Rheonix Inc., of Ithaca, New York. It uses a patented technology to move fluids in a precise manner through the card to detect proteins and nucleic acids, such as antibodies to HIV and HIV RNA.

The card, part of the lab-on-a-chip movement but still in a research stage, is an inexpensive disposable unit run by a portable processor that could be powered by a car battery. “This would be useful in a remote setting where HIV is endemic,” Malamud said. It will be available in two years for use in the field, in places like Africa where need is great for portable, cheap and disposable technologies.

Cancer detection
Breast cancer applications were described by Charles F. Steckfus, a professor of diagnostic sciences at the School of Dentistry at the University of Texas Health Science Center at Houston. His studies suggest cancer-marker detection could one-day occur in the dentist’s chair during oral screening.

He said the proteome in saliva offers a useful in vivo model of breast cancer progression, providing insights both into the individual patient and the genetics of the disease itself.

Breast cancer involves many genes, each with different functions at play. A patient’s saliva sample contains a basic profile of how the genes of that individual are modified during cancer treatment.

“It gives us a better understanding of what genes and proteins to target for therapy. Once we understand which genes are being modulated up and down, then we can come back to diagnostics. The cancer can lie dormant for years, and though a patient is positive, we won’t see a tumor,” he said. “Each person’s cancer is different from others, so we have to key in on personalized care. Salivary study will help us develop new therapeutics, because we see the cancer develop in in real time.”

Time-of-flight technique
The diagnostic technique is based on laser time-of-flight mass spectrometry, with proteins identified by time it takes from when the laser signal hits the peptide to when the information returns to the detector. “That time tells you the mass of that particle, the weight,” Steckfus said. “Then that goes into a huge data bank, and they can identify the proteins. You can tell which are on the increase and which are decreasing, a get a running profile.”

“What’s exciting to me is that the tissue from the breast is communicating with the salivary glands. They are both exocrine glands and have cells that produce different products. Under the microscope they look very similar.”

The overall conference chair, Sarka Southern, scientific director of the Gaia Medical Institute in La Jolla, California, described the conference, which she started in 2007, as a forum to bring together experts from medicine, biology, engineers and the military. “These are worlds that normally don’t meet,” she said.

The DoD-funded labs are developing sensing military medicine technologies at a high level, while physicians and biologists are making devices at a low level, she said. “With these exchanges of information, everyone will benefit.”

“In global health, saliva diagnostics is a trend that improves on blood sampling, and can save money by emphasizing preventive medicine. Meanwhile, military medicine needs to put more funding into such topics as part of Force health. NIH is just coming around to things like saliva diagnostics, and this year we have brought NIH on board.”

Sessions on life in extreme environments looked at the needs of astronauts in the international space station and army work environments in heat, cold or high altitudes. A presentation on lessons from Tibet took up the physiology of adapting to high altitudes in a short time span and the impact of low oxygen on health.