ChromaID compares spectral response to structured light against a database of patterns. 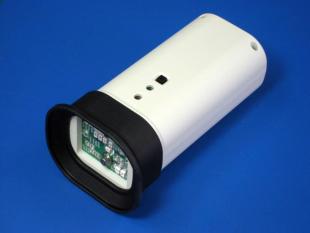 The ability to identify unknown substances, warn of contamination, or even spot tell-tale evidence of different medical conditions, all using a hand-held non-invasive scanner has been moving steadily out of the sci-fi realm for some time.

Look no further than the Qualcomm Tricorder XPRIZE, a $10 million global competition launched in January 2012 to stimulate integration of diagnostic technologies into a consumer device, for proof that the concept is attractive and potentially robust.

One company already well down the road with a working platform is Visualant, the Seattle-based developer whose ChromaID technology won a Prism award in the Green Photonics category at SPIE Photonics West earlier in 2013.

Incorporated into a hand-held scanner that the company calls the Cyclops, ChromaID employs an array of LEDs to shine multiple carefully controlled wavelengths onto a sample, and measure the intensity of light reflected back at each wavelength.

Compared to a standard spectrophotometer, which irradiates with a broadband source and then sets about unpicking the spectral composition of the reflected light after it has interacted with the specimen, ChromaID holds a number of advantages.

"Structuring the light to begin with by controlling the wavelength is a much better approach, and leads to much greater convenience," said Tom Furness, chairman of Visualant's scientific advisory board and co-inventor of ChromaID. "We never intended to develop a laboratory instrument or a traditional spectrophotometer; our aim was to build a practical device that can match and compare spectra. In ChromaID we achieve that by using multiple LED emitters, and driving each of them at a range of different currents."

Shifting wavelengths
The Cyclops scanner features 32 LEDs ranging from 350 nm to 1450 nm. Each one is fired at 25 distinct current steps to produce different wavelengths of light, and the resulting reflectance is sampled by four photodiodes, yielding a grand total of 3,200 data points in a characteristic spectral fingerprint.

This data cloud is then matched with existing fingerprints loaded into the system for identification. Thanks to specially designed sample cells, Visualant can apply the technique to samples in solid, liquid or gaseous form.

"Data handling is a significant consideration, given the size of the spectral fingerprint, and we have developed specialized algorithms to do the job," commented Furness. "Different situations require different confidence limits, and the user can adjust this to suit their need for avoiding false-positives or false-negatives."

LED manufacturers typically abhor variations in the parameters of the emitted light, but when ChromaID teases its emitters into outputting different wavelengths by varying the current, it's turning this behavior into a desirable characteristic.

"When we started development in 2005, the available variety of LEDs was not as wide as it is today, and we found that some LEDs simply worked better than others," said Furness. "But we now understand enough about the physics of LEDs that we can manipulate it to our advantage, both in off-the-shelf emitters and through the design of specialized LEDs that have the particular characteristics that we want." 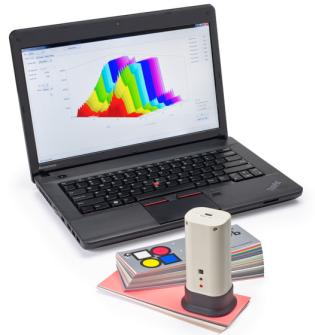 Furness indicated that the company's IP includes variants employing lasers rather than LEDs, along with a broader spread of wavelengths and the use of different photodetectors, CCDs or CMOS cameras.

Visualant will also plans release a development kit for the technology, in partnership with Sumitomo Precision Products.

Changing over to laser irradiation could be particularly significant, and allow other forms of interaction to take place beyond simple Rayleigh scattering.

"Lasers introduce new advantages because of the coherence of the light, such as potentially allowing us to look at Raman effects," commented Furness, who noted that Visualant had already trialled the use of laser sources. "With conventional Rayleigh scattering we are examining the gross crystalline structure, but moving towards coherent light will let us investigate the atomic structure of the materials."

Using an array of diode lasers to mimic the use of LEDs is likely to be both expensive and impractical, however, so development of a suitable laser source with the right characteristics will be crucial.

"The logical holy grail would be an electronically agile laser boasting a tunable wavelength," Furness said. "To be able to sweep through a wavelength range would be a real boon. Current tunable cavity lasers are not really suitable, but I'm particularly interested in developments in quantum dot technology for the future."

Multiple applications
Even in its current form, ChromaID and the Cyclops scanner could readily find use in a wide range of scenarios, with clear benefits in security and authentication applications.

Agriculture could also be a key market, employing ChromaID to determine sugar levels within fruit by examining the surface, or to indicate when irrigation or harvesting is needed. Medical applications are another obvious target, as Furness noted.

"One of my own particular interests now is using this technology in medical diagnosis; using it to look transcutaneously through the skin and extract information about glucose, cholesterol, free radicals in the blood, and so on."

Visualant is also examining ways to incorporate its technology into scanning fiber endoscopes, from where ChromaID may also prove a valuable method to characterize malignancies or deliver 2-photon therapy.

"It's difficult to get inside the body, of course, but we I think we have a solution for that," said Furness. "We're not discarding any of the many potential applications for ChromaID at this stage. This is an example of the kind of project involving fundamental manipulation and sensing of light that is going to be huge in the next decade."

Tim Hayes is a contributing editor at Optics.org