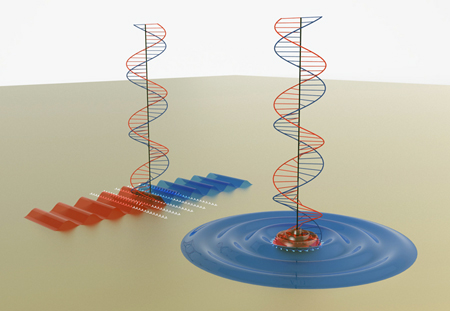 Two device designs based on the herringbone pattern: rectangular and ring-shaped arrays.

Researchers led by a group from Harvard School of Engineering and Applied Sciences, Cambridge, MA, USA, has created what they are calling a new type of nanoscale device, which converts an optical signal into waves that travel along a metal surface.

Significantly, the device can recognize specific kinds of polarized light and so send the signal in one direction or another.

The findings, published in the April 19 issue of Science, offer a new way to precisely manipulate light at the subwavelength scale without damaging a signal that could carry data. The researchers say this development opens the door to a new generation of on-chip optical interconnects that could transfer information from optical to electronic devices.

Co-lead author Balthasar Müller, a graduate student at the Harvard School of Engineering and Applied Sciences, commented, "If you want to send a data signal around on a tiny chip with lots of components, then you need to be able to precisely control where it's going. If you don't control it well, information will be lost. Directivity is such an important factor."

The coupler transforms incoming light into a wave called a surface plasmon polariton – in effect, a ”surface ripple” in the sea of electrons that exists within metals.

Previously, it has been possible to control the direction of these waves by changing the angle at which light strikes the surface of the coupler, but, as Müller says, "This was a major pain. Optical circuits are very difficult to align, so readjusting the angles to route a signal was impractical."

With the new coupler, the light simply needs to come in perpendicular to the surface, and the device does the rest. Acting like a traffic controller, it reads the polarization of the incoming light wave—which might be linear, left-hand circular, or right-hand circular—and routes it accordingly. 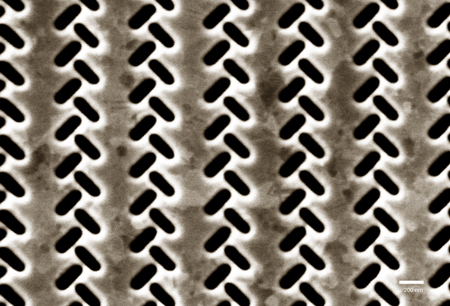 Nanoscale perforations at the surface of the (gold) plasmonic coupler.

The device can also split apart a light beam and send parts of it in different directions, enabling information transmission on multiple channels. The coupler consists of a thin sheet of gold, peppered with tiny perforations. But the precise pattern of these slits, arranged rather like herringbones, is where the innovation lies.

"The solution until now has been a series of parallel grooves known as a grating, which does the trick but loses a large portion of the signal in the process," says principal investigator Federico Capasso, Robert L. Wallace Professor of Applied Physics and Vinton Hayes Senior Research Fellow in Electrical Engineering at Harvard SEAS.

"Now perhaps the go-to solution will be our structure. It makes it possible to control the direction of signals in a very simple and elegant way."

Because the new structure is so small—each repeating unit of the pattern is smaller than the wavelength of visible light—the researchers believe it should be easy to incorporate the design into novel technologies, such as flat optics.

Capasso is postive about the possibilities of incorporating the new coupler into future high-speed information networks that could combine existing nanoscale electronics with optical and plasmonic elements on a single microchip. "This has generated great excitement in this field," he says.

Müller and Capasso were joined on this work by co-lead author Jiao Lin, a former SEAS postdoctoral fellow who is now at the Singapore Institute of Manufacturing Technology; and coauthors Qian Wang and Guanghui Yuan, of Nanyang Technological University, Singapore; Nicholas Antoniou, Principal FIB Engineer at the Harvard Center for Nanoscale Systems; and Xiao-Cong Yuan, a professor at the Institute of Modern Optics at Nankai University in China.

The research was supported by the U.S. Air Force Office of Scientific Research, the Agency for Science, Technology, and Research (A*STAR) in Singapore, the National Natural Science Foundation of China, the Ministry of Science and Technology of China, and the National Research Foundation of Singapore. Part of the work was performed at the Harvard Center for Nanoscale Systems, which is a member of the National Nanotechnology Infrastructure Network, supported by the U.S. National Science Foundation.