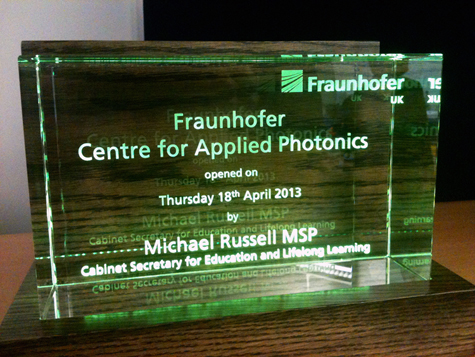 The new UK headquarters for Europe’s largest contract research organisation has officially opened this month – initially being housed within the University of Strathclyde, in Glasgow, Scotland.

The Fraunhofer Centre for Applied Photonics (CAP) aims to provide laser research and development – and associated technologies, including optical sensors – for a variety of sectors, such as security, healthcare, energy and transport.

Professor Sir Jim McDonald, Principal of the University of Strathclyde, said at the opening ceremony: “The Fraunhofer CAP will work closely with partners in business, industry, government and the broader Scottish academic community to develop the products and services of tomorrow and support the economy.

“As the first Fraunhofer research center in the UK, it reflects and supports Strathclyde’s position as a leading international technological university, and center of excellence for industrial engagement – specifically in the field of photonics research and commercialization, via our Institute of Photonics and other research groups.” 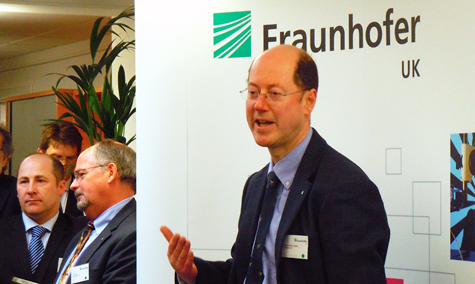 Professor Martin Dawson, Fraunhofer CAP’s Head of Center and Associate Director of the Institute of Photonics, said: “We have a fantastic opportunity to work closely with businesses across the UK – as well as our partners at both Strathclyde and other universities.

“We are also drawing on technologies that are already strongly represented here in Scotland: for example, R&D projects at St Andrews, Strathclyde and Heriot-Watt universities, but also UK-wide at photonics-focused universities such as Southampton and Imperial College, London.

"We know that there is a real industrial market for solid state lasers; this technology is already widely used by companies from the big multinationals, such as Thales and BAE Systems, through to SMEs and start-ups.”

"Ultimately, we intend to broaden out the Fraunhofer CAP offering. My interests encompass LED technology, solid state lighting, visible light communications, diamond photonics, organic and nano-composite photonics. There’s a wide range of topics into which we can diversify starting from the solid state focus.” 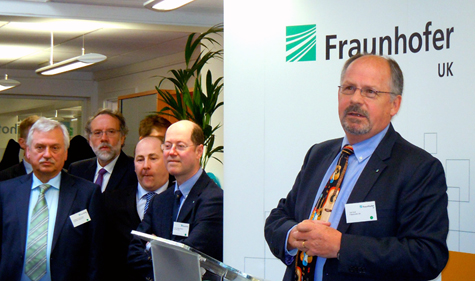 Tim Holt, Executive Director of Fraunhofer UK Research Limited, added: “The establishment of the first Fraunhofer research center in the UK has been a truly collaborative effort by the Scottish Government, Scottish Enterprise, the Scottish Funding Council, the University of Strathclyde and our German partners, Fraunhofer Gesellschaft and Fraunhofer IAF in Freiburg.

“The aim of the Fraunhofer CAP is to assist companies across the UK to develop new innovative products and processes as well as providing them with a supply of well-informed, knowledgeable and practical recruits who understand what industry demands from them."

Paul Lewis, managing director of operations at Scottish Enterprise, said: "Fraunhofer centres excel in supporting companies to develop new products from research. Having this centre in Scotland will bring significant benefits for our companies, helping them to invest in their growth, sharpen their competitive edge and compete in global markets.

“That a major international organisation such as Fraunhofer has chosen to base its first UK research center in Scotland is testament to our position as the leading UK location for R&D investment.”

Mark Batho, chief executive of the Scottish Funding Council, said, “We are pleased to support the first UK Fraunhofer research centre. This is testament to Scotland’s reputation for world-leading research. It will create economic growth, translate research expertise into help for businesses to develop new products and services, and produce highly skilled graduates for industry.”

The Fraunhofer CAP has been created with funding from Germany-based Fraunhofer, the University of Strathclyde, the Scottish Government, Scottish Enterprise and the Scottish Funding Council. Initially based in bespoke Strathclyde accommodation – where custom-built laser laboratories have been created – the Fraunhofer CAP will ultimately be a “key tenant” in the University’s forthcoming Technology and Innovation Centre.