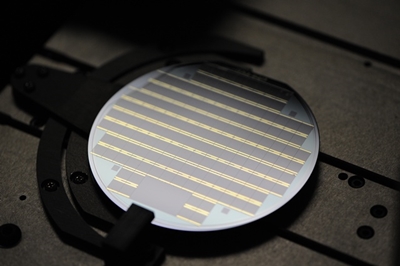 UK researchers in London and Bristol have won a £1 million grant to develop high-performance compound semiconductor solar cells based on self-organized quantum-dot structures.

Principal investigator Luiyun Liu and Alwyn Seeds, head of the photonics group at University College London (UCL), are set to receive just over £600,000 to develop a deposition process to fabricate the cells on silicon substrates, while a team at the University of Bristol will contribute device modeling and characterization expertise.

In a brief announcement about the project, which officially began on April 1 and runs until September 2016, UCL’s Department of Electronic and Electrical Engineering said:

“We will exploit the advantages of both quantum-dot technology and germanium-on-silicon substrates to develop both multi-junction solar cell and intermediate band solar cell designs.”

MBE growth
The UCL researchers will grow the structures using the molecular beam epitaxy facility within the department, with device fabrication taking place at the London Centre for Nanotechnology – a joint venture between UCL and its neighbor Imperial College.

The thinking behind the use of a silicon substrate follows a similar trend already evident in the manufacture of high-brightness LEDs, where large companies such as Osram, Samsung and Epistar are all working on structures that combine the excellent photonic properties of compound semiconductors with the volume manufacturability of silicon.

Along with the likes of UK-based Plessey Semiconductors and California’s Bridgelux, they have all developed some form of “barrier” layer that compensates for the lattice and thermal mismatch between the silicon and compound semiconductor materials, something that can be highly detrimental to device performance.

But a similar approach to make the high-efficiency solar cells that are typically used to power satellites and in concentrated photovoltaics (CPV) applications has not yet reached any level of commercialization.

That technology was eventually acquired by JDSU, although the US-based maker of lasers and various other optical components has since ditched its planned development of the high-performance cells amid the difficulties that have beset the wider PV market in recent years and compromised a number of CPV companies.