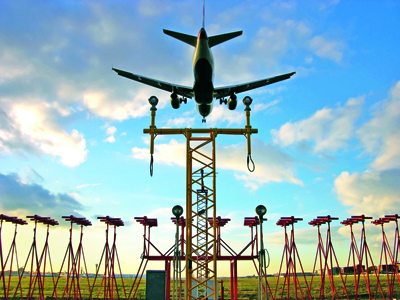 Clear for take-off? A new system of air monitors is under test at Heathrow.

Atmospheric pollutants such as ozone, nitrogen dioxide, volatile organic compounds (VOCs) and fine particulates - mostly from vehicular emissions - put a strain on the environment and affects people’s health, which could result in reduced life expectancy.

Real-time monitoring of air quality is important for understanding the factors that influence air pollution.

A new system of instruments is currently being tested in and around London’s Heathrow airport – the so-called Sensor Network for Air Quality (SNAQ) with 50 stations has been installed to measure the air pollution caused by road and air traffic around Heathrow airport.

The small battery-powered instruments are lamppost-mounted and contain a number of sensors that measure six gases, VOCs and airborne particulates. The system works wirelessly – data transmission is via GPS and GPRS to a central server.

The project has been funded by the British Natural Environment Research Council and is running from 2011-2013. The objective is to discover new insights in dynamic levels of airborne pollution and demonstrate the potential of the sensor network for characterizing air quality in the urban environment.

“Ultimately this could lead to understanding the links between pollution events and their impact on human health” said Prof. Rod Jones, Dept of Chemistry, University of Cambridge and Principal Investigator on the SNAQ at LHR Project.

Heraeus Noblelight supplies the PID lamps used in the sensors.

Photoionization is the term for the absorption of high energy photons by a molecule which results in ionization of that molecule. The current created by ionization is proportional to the concentration of the molecule, so this provides a simple method for quantitative analysis of a variety of compounds.

The technique is non-destructive so can be used in conjunction with other detectors for extending the analysis. Photons will only ionize molecules with an ionization potential less than the photon energy.

Heraeus has extensively tested and selected materials to establish a quality standard in PID manufacture. Heraeus’ use of pure crystal MgF2 windows produces improved transmission and lifetime. The company manufactures a wide range of PID lamps to standard and customer specific designs in both RF and DC versions.