Biophotonics in the spotlight at UCL 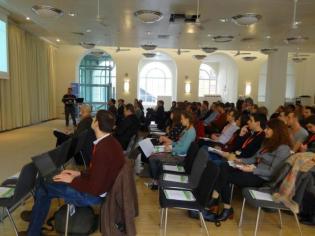 A one-day conference on recent advances in biophotonics tools and applications gave a clear sense of the rapid pace of development currently underway in the field.

The meeting, held as part of the Photonex Roadshow event at University College London (UCL), was the second in what the organizers intend to be an annual series, giving researchers the chance to describe recent advances in key methods and techniques employed in life sciences.

Discussions at the conference included presentations on a number of the field's current cutting-edge topics.

"Scattering of near-IR illumination confounds the ability to quantify the presence of hemoglobin and oxygenated hemoglobin, by blurring the signal as it passes through tissue," said Dehghani.

A solution involves calculating the average path length photons take across the tissues, modeling the light propagation as a diffusive process. Parameters such as the concentrations of both forms of hemoglobin, along with the presence of other molecules including water and lipids, can then be assessed from combining measurements of the near-IR absorption and the scattering.

"Breast cancer tumors are characterized by an elevation in hemoglobin and water content, and a decrease in oxygenated hemoglobin, as well as decreased scatter size," commented Dehghani. "A system combining MRI imaging with diffuse optical imaging could add functional information to the findings of the MRI scan, in a way not previously possible."

Dehghani showed results from scans of breast cancer patients in which 3D reconstructions of hemoglobin and blood flow had been made, and commented that "the revolution of being able to move from 2D to 3D has been dramatic."

He also described applying similar principles to neuroimaging, employing a flexible cap worn by the patient with 24 near-IR sources and 24 detectors to provide tomographic information about brain activity. While the patient observes visual patterns as a stimulus, this high-definition diffuse optical tomography (HD-DOT) system identifies the changes in oxygenated hemoglobin arising from brain activity.

Although this generates temporal information rather than absolute images, Dehghani sees HD-DOT as a more practical alternative to other neuroimaging modalities, and is moving towards whole-head imaging rather than examination of just the visual cortex.

"Most hemodynamic neuroimaging employs functional magnetic resonance imaging, which is limited in its use as a practical bedside tool, whereas HD-DOT can provide cheap, fast, comprehensive hemodynamics," he commented.

Turning epilepsy off
"Treatment of epilepsy via optogenetics, whereby the epilepsy is modulated on demand by shining light into the motor cortex, is now becoming feasible," said Dimitri Kullmann of UCL.

In further proof of the potential versatility of optogenetics, Kullmann described treatment of an experimental model of focal epilepsy induced in the neocortex of rodents. Focal epilepsy is a form of the condition that is known to be resistant to drug treatments, but optogenetics allows the principal neurons involved to be affected directly. 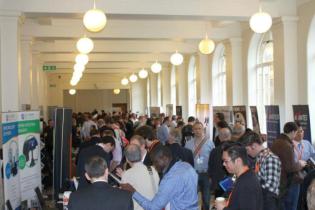 "Epilepsy has a clear biomarker: the EEG trace," commented Kullmann. "The ultimate tool would be to couple detection of a seizure by the EEG with suppression of that seizure through light applied to the optogenetically enhanced neurons via LED pulses."

Proof-of-principle work has already been carried out, using light pulses delivered by optical fiber into the neocortical zone of rodents where the principal neurons had been optogenetically modified with halorhodopsin.

The results showed that illumination could suppress the jerking activity characteristic of focal epileptic seizures.

Future developments could include a 'wireless' set-up in which the animal does not need to be tethered by optical fiber, perhaps using implantable battery-powered LEDs controlled via radio.

"Designing an efficient light source that can be implemented in a freely moving animal is one of the next challenges," said Kullmann. "Others include the need for a self-contained design with an EEG detector on-board, able to make the decision to defibrillate on its own."

Adaptive optics for nanoscopy
Martin Booth of the University of Oxford described the many potential sources of wavefront aberration present in biological imaging scenarios, and how adaptive optics (AO) could play a significant role in combating them.

"Biological specimens can exhibit variations in refractive index arising from the three-dimensional nature of cells and tissue structures, which in general become greater in magnitude as the focus depth is increased," he said. "Planar mismatch between the microscope cover-slip and the specimen mounting medium can also introduce spherical aberration."

Adaptive optics systems used in astronomy often work by measuring the incoming wavefront and applying corrective measures via a deformable mirror, but for smaller biological samples a different approach is needed.

"Our system works by applying known aberrations deliberately, once the illumination has left the source," said Booth. "The effects are rapidly deduced, and the aberrations adjusted accordingly via a feedback loop. This allows us to work towards compensating for inherent aberrations by seeing which applied ones give the best results." In effect the aberrations are sequentially corrected through an image optimization process.

Among other uses, such an AO system could assist with super-resolution nanoscopy. One example is stimulated emission depletion (STED) microscopy, a fluorescence-based technique for improving resolution in which a second laser beam quenches fluorescence in a carefully controlled area.

"STED is still susceptible to aberrations, especially when producing three-dimensional images from thick specimens," said Booth. "The technique needs a good 'zero' spot at the center of the quenched area, and aberrations can have different effects upon that spot. We have implemented adaptive correction of aberrations in a STED microscope using image-based feedback for the first time, a critical step towards achieving 3D super-resolution inside strongly aberrating samples." 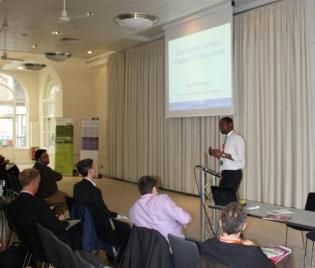 Contrast imaging in oral medicine
A significant problem in monitoring oral diseases is identifying the most suitable and representative areas for biopsy.

"Selecting the right site for assessing conditions of the face and mouth is critical," said Oluyori Adegun of Queen Mary, University of London. "Get it wrong and the results could be no help at all."

What's needed are non-invasive quantitative methods for direct evaluation, to combat the qualitative indirect methods that have tended to predominate.

One solution in ex vivo clinical settings could be to generate disease-specific parameters from contrast imaging. Adegun described the assessment of two conditions, oral fluid-filled lesions and oral epithelial dysplasia, in which results from histological processing had been combined with data from optical coherence tomography (OCT).

In each case, disease-specific optical markers could be quantified from particular changes in the OCT information, including the intensity of the back-scattered light and its rate of change, which correlated with changes in tissue condition seen via histopathology.

"Measuring these gradient and scaled intensity-drop (SID) parameters from sequential scans within OCT volumes allows the generation of 2D contrast en-face images to visualize the way both parameters are varying," said Adegun. "This in turn allows quantitative contrast visualization methods to be developed, such as SID microscopy and scattering attenuation microscopy, that measure the axial intensity change of light backscattered from epithelial tissue."